A good plate of beef stew in tamarind sauce, called seco de carne con tamarindo in Ecuador, is perfect for this time of the year when it starts to cool down and you need something comforting to warm you up. The flavors of the meat slowly cooked in a sauce of tamarind, beer, garlic, cumin, achiote, oregano, peppers, onions, cilantro, parsley, tomatoes, and other spices, is an ideal mix of spicy, sweet and salty.

Secos are a type of stew and are very popular in Ecuador and other South American countries. These yummy stews are usually made with beef, goat, lamb, pork or chicken, but fish can also be used. The meat or poultry is slow cooked in a sauce made from a combination of liquid that can include beer, chicha, fruit juice, or wine, along with vegetables such as tomatoes, onions and/or peppers; and various different seasonings, spices and herbs –garlic, cumin, coriander, achiote, cinnamon, cilantro, parsley, oregano, among others.

The exact ingredients and quantities vary from one type of seco to another, as well as from one region to another, but the goal is always the same: to obtain a delicious tender meat that breaks easily with a fork and that melts in your mouth, all inside a very flavorful sauce that has slowly absorbed each distinct flavor to create one amazing taste.

I’ve mentioned before that secos are one of the best comfort dishes and I especially crave them when it is cold. I also love the versatility of these stews, you can make a great seco de carne or beef stew by preparing it in the most well known way –at least in Ecuador – which is with beer. In past times it used to be that secos were always prepared with chicha, which is a fermented corn drink,but now beer has replaced chicha as the liquid of choice to prepare a good seco.

I wanted to change this seco de carne and used tamarind pulp instead of only beer – or naranjilla juice which is also very popular. I have great memories of my mom buying huge amounts of tamarind. Sometimes she would buy the whole beans and other times she would buy these packs of tamarind where the bean shells had been removed and the flesh and seeds were tightly packed into a medium sized plastic bag.

The tamarind in those bags had a very intense taste, I loved getting a spoonful of it and eating it pure – it was good but very strong. My mom would boil it with water and panela or brown sugar to make fresco de tamarindo – a very refreshing drink.

For this recipe I used frozen tamarind pulp, in the Latin grocery stores you can find an assortment of frozen concentrate or pulps of different fruits in their freezer section. If you can’t find the frozen pulp you can use tamarind juice, but if it has added sugar then don’t add the panela or brown sugar or the sauce will be too sweet.

I’ve seen the tamarind beans at a few supermarkets, you can also use those, simply peel the hard skin off, boil the insides –seeds and all- with a cup of water,then remove the seeds, you can taste it and make it as concentrated as you like. The only problem with the beans or pods is that they aren’t always very fresh, and in those cases the flavor won’t be as concentrated, so it’s best to get the frozen concentrate or the paste that they sell in Asian supermarkets.

One of the best parts of a good seco is the sauce, which is why secos are always served with rice: it is the best way to soak up the delicious sauce. Other typical side dishes include boiled or fried yucas or cassava root– a starchy vegetable similar to potatoes but still very different , as well as fried sweet plantains,pickled red onions or a small salad, avocado slices, and hot sauce. 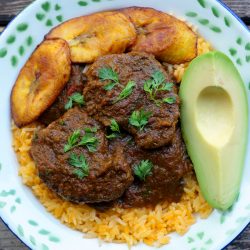 Other recipes for secos: