I have to admit that I was somewhat traumatized by creamed soups when I was a kid. A typical meal in Ecuador would consist of the “primero” or first course, which was always a soup. Followed by the “segundo” or second course, which usually rice with meat, chicken, fish or egg. I always loved certain first course soups like encebollado de pescado, arvejas con guineo, locro de papas , and other traditional Ecuadorian soups. However, I never really liked the “cremas” or pureed soups and I was fortunate that my mom didn’t usually prepare pureed soups.

When I was in elementary school I had to walk about an hour to get from our house to school, so my mom arranged for me to have lunch at one of my classmates house who lived a few minutes away from our school. My friend’s mom loved to make these packaged cream soups. It was considered very rude to not finish your plate, so I had to eat every single bite (which I didn’t always do at home since I was a little bit of a brat). I have since then reconciled myself with creamed soups, as long as they are made from scratch. Though I like to add a little of extra something – as a topping – to keep these soups interesting.

I served this celery root soup with three different toppings: crispy fried pancetta or bacon, smoked salmon and a spicy roasted pepper yogurt sauce. Each topping adds a little twist of different flavor to the soup. You can have the soup with just one topping or mix and match as you wish.

You would think that three toppings would be enough for most people, except for Alex (my 5 year old). He asks me “where’s the avocado?”, so I added an additional topping just for him (sorry no photo). It’a given in our house that soup should always be served with a side of avocado. That should have been sufficient, but no, then he asks “how about some goat cheese?”, so he also had some cheese. I hope he won’t be traumatized and 20 years later start writing about all the soup toppings he had to endure, and how he just wanted a basic packaged cream soup. 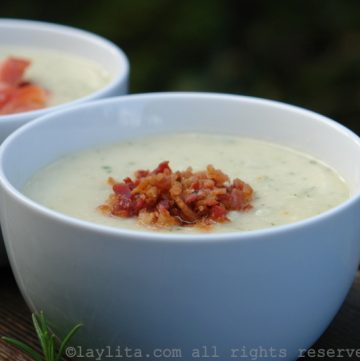