Llapingachos are a traditional Ecuadorian dish of potato patties or thick potato pancakes stuffed with cheese and cooked on a hot griddle until crispy.

Llapingachos, also called yapingachos, are typically served as a side dish for many Ecuadorian main courses. Llapingachos also make a great breakfast or brunch dish, and can be served on their own as an appetizer or even as a full meal accompanied by a tasty peanut sauce or salsa de mani, fried egg, chorizo style sausages, pickled onion and tomato salad, some lettuce, avocado slices and aji criollo hot sauce.

These potato patties can be a little bit “tricky” to make (to quote my 5 year old), but I have a few tips from having failed to get them right several times that can help make the preparation relatively easy. And of course the more you make them, the better you become at getting them just right.

First of all, the type of potatoes that are used are very important, I tried making them with Yukon gold potatoes and it wasn’t working out, the flavors were great, but the consistency was just too soft. So, I recommend using Russet potatoes or a potato that is very starchy. Once you’ve practiced with the Russet potatoes you can try with the Yukon golds. They taste even better, but just need a little extra care.

Finally, when cooking the llapingachos, try to avoid using any oil or grease, this will help prevent them from breaking up. It helps to use a griddle, but regardless of whether you use a griddle or a frying pan make sure it is well heated. Kind of like making that first pancake you can assess how hot and how long the llapingachos needs to cook on each side to have that nice crispy golden brown finish.

I used to turn them several times back and forth, but if you let them cook long enough on each side and just turn them once the results are much better, and since the patties are pretty delicate you have to be very careful when turning them.

The ingredients below should make about 12 medium sized llapingachos; you can make the patties smaller if you are serving them as appetizers. 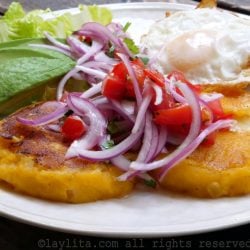