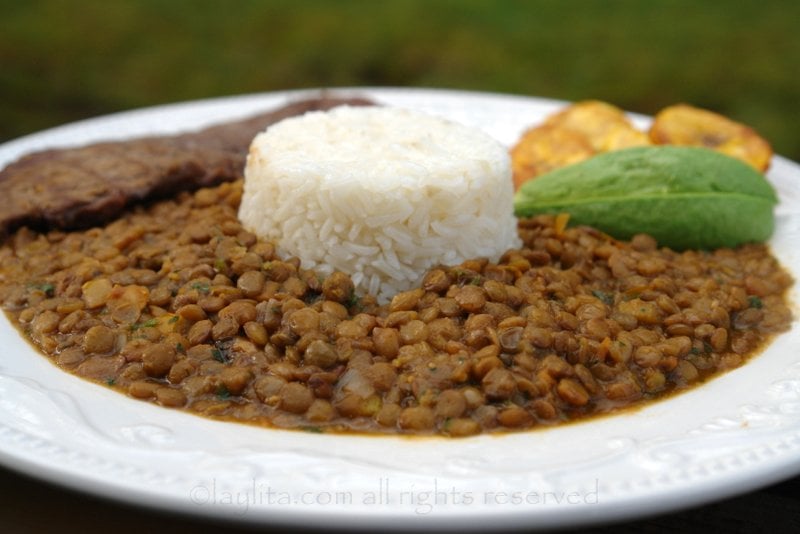 Arroz con menestra or simply menestra is a very popular dish in Ecuador, and you can find it almost everywhere, though the Coastal region has the strongest claim on this dish. A menestra is usually made with lentils, but there are also versions made with bean or porotos. The lentils are simmered in a broth with onion, pepper, tomato, garlic, cumin and cilantro.

Even though there is a lot of flavor in the broth, sometimes you can give it a boost of flavor by preparing an additional refrito/sofrito and mixing it back into the dish at the end. In the coast, it is also common to add plantains to this menestra dish. I’ve had it both with slices of ripe plantains and thinly grated green plantains.

The ripe plantains give a sweet contrast to the dish. The thinly grated green plantain adds a bit of additional flavor, but also acts as a natural thickener for the lentil menestra. If adding plantains, you can do so during the last 20 minutes of cooking.

For an extra boost of flavor, prepare a quick refrito or sofrito by sauteeing about 1/2 onion with a few cloves of crushed garlic, a couple of diced tomatoes, and ground cumin/achiote powder/salt to taste until the ingredients are softened and you have a flavorful sauce. Stir in the sauce to the main menestra when the lentils are done cooking.
To add a green plantain, peel a green plantain and grate it using a fine grater, stir the grated plantain into the menestra during the last ~15-20 minutes of cooking, mix it well so that it integrates into the stew - you will notice how it thickens the dish and adds a slight plantain flavor.
To add a sweet plantain, peel and cut a plantain into 1/2 to 1 inch slices and add them to the menestra during the last 20-25 minutes of cooking, they should be fully cooked by the time the dish is ready.

While this lentil stew or menestra is usually served with grilled or fried meat, you can also ask for it to be served with chicken and if you’re near the coast, then also fish or seafood. I remember my mom, during a period when she was trying to be vegetarian and make us vegetarians, would always ask for a fried egg instead of the meat.

Even though I wasn’t too happy about that at the time, and was very jealous of the people around us that got the meat,  I now love arroz con menestra with a fried egg. To adapt this recipe for a vegetarian diet replace the meat with a fried egg. Other side dishes, in addition to the must-have rice and protein, include avocado slices, ripe fried plantains or patacones (green fried plantains), and a small salad or curtido.

To serve with menestra de lentejas or Ecuadorian lentil stew:

Recipe for patacones or tostones

Recipe for tomato and onion curtido 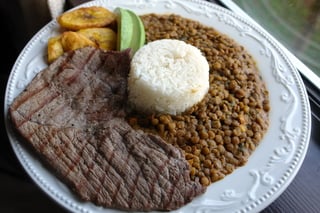 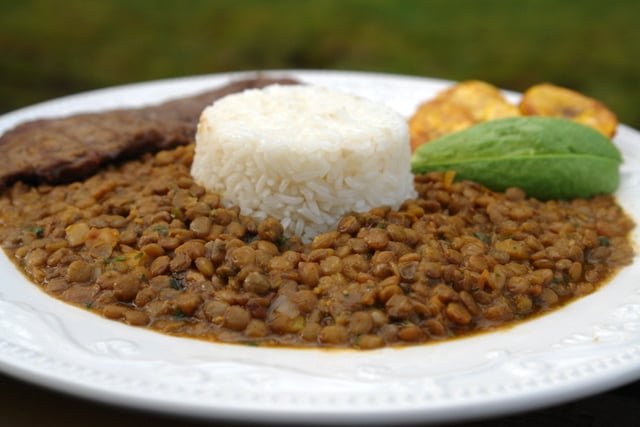 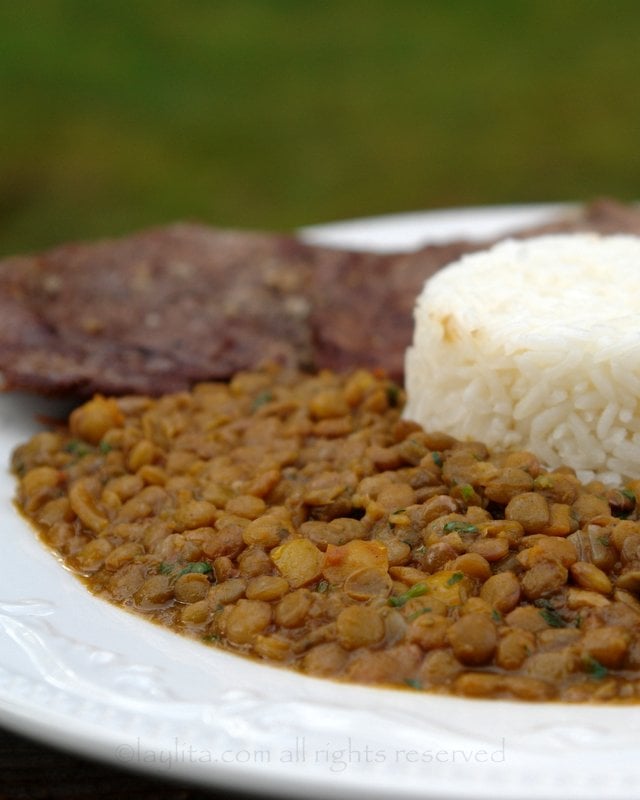