My version of cilantro chimichurri is inspired by an Ecuadorian cilantro oregano sauce that is used to marinate and season seafood for grilling. Its most popular use is for the famous Ecuadorian conchas asadas or grilled black clams. Last time I was in Ecuador we spent some time at the beach, and had a barbecue where we used this cilantro chimichurri sauce on everything from the black clams to shrimp and octopus.

The more well known Argentinean style chimichurri is usually made with garlic, oil, red wine vinegar, fresh parsley plus oregano, some also add thyme. At least based on the comments I’ve received on FB no one can really agree on the exact ingredients and everyone has their own “best” version.  The classic version is perfect for grilled meat dishes. This Ecuadorian inspired chimichurri sauce is a little bit softer and more mild. This makes it perfect for seafood – but also works with vegetables, poultry, and even pork.

I highly recommend using fresh oregano, it gives this sauce such a wonderful flavor. However, if it isn’t available you can replace it with a couple tablespoons of dry oregano.  Most of the cilantro we find in the US is young cilantro. It has very soft tender stems that are not only edible but also add a lot of flavor. In Ecuador, the cilantro is usually grown for longer before being harvested and taken to the markets. As a result, the stems become longer and harder. They have a very flagrant flavor, but it’s best to remove the stems and only use the leaves (plus any smaller soft stems).

It is also more common to use spring onions than scallions in Ecuadorian cuisine. We also mainly use the white part of the spring onions. Here in the US it is much easier to find green onions or scallions, so I tend to use those as a replacement. I chopped and diced the ingredients for this chimichurri sauce. You could also prepare it using a mini-food processor for an easier quicker version.  I do find that the flavors change slightly, however it’s still delicious. 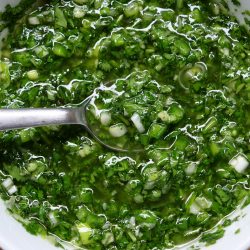 In Ecuador, this cilantro oregano chimichurri sauce isn’t spicy, for a spicy version you can replace the green bell pepper with jalapeños. For a mildly spicy version remove the seeds and veins from the hot peppers, or use a mix of both bell pepper and jalapeño.

Step by step preparation photos for the cilantro chimichurri recipe: