Simple recipe for hominy corn cooked with the gravy or sauce from roasted pork hornado. This dish is known as mote refrito con salsa de hornado, and is variation of the Ecuadorian mote sucio recipe.

This is my quick and easy recipe for hominy with hornado roasted pork gravy, a variation of the popular mote sucio dish. Hornado de chancho or Ecuadorian style roasted pork is usually served with a side of mote blanco or white hominy corn. The hominy is sometimes served just plain – boiled in salt water.  Since I had a decent amount of hornado sauce or gravy after roasting the pork, I decided to mix some of it with the hominy to give it that pork flavor.

I also added some diced shallots or onions and garlic with the sauce to give it a little extra fresh flavor. This hominy dish is a variation of the Ecuadorian mote sucio recipe, which is usually made by mixing cooked mote corn with the mapahuira or pork grease from another traditional Ecuadorian pork dish called fritada de chancho or mixed with pieces of pork belly chicharrones.

Hominy corn can be found canned, in the canned good section or the Latin/Ethnic aisle, at most supermarkets. It is already cooked and just needs to be warmed up, though I recommend rinsing it before using. You can also purchase dried hominy and boil it until tender. It takes longer to cook but the flavor of freshly cooked hominy is the best.

If you don’t have any pork gravy sauce you can cook some finely diced bacon with the onions/shallots. For a vegetarian version of this dish you can replace the gravy with 2-3 tbs of butter or olive oil. Even just a basic refrito made with onion, garlic, cumin, and achiote (annato) is a quick and easy way to give the hominy corn some flavor. 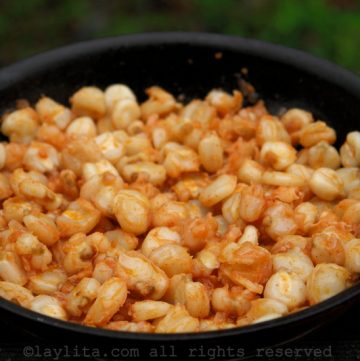 Use diced bacon or pancetta as an alternative if you don’t have leftover pork gravy sauce. It won’t be exactly the same, but it will be a delicious variation.