Recipe for homemade brigadeiros, a traditional Brazilian chocolate truffle made with cocoa powder and condensed milk rolled in chocolate sprinkles. This recipe and text is contributed by Andressa Vieira. She also shares ideas for different brigadeiro variations (including vegan) and an easy homemade condensed milk recipe. 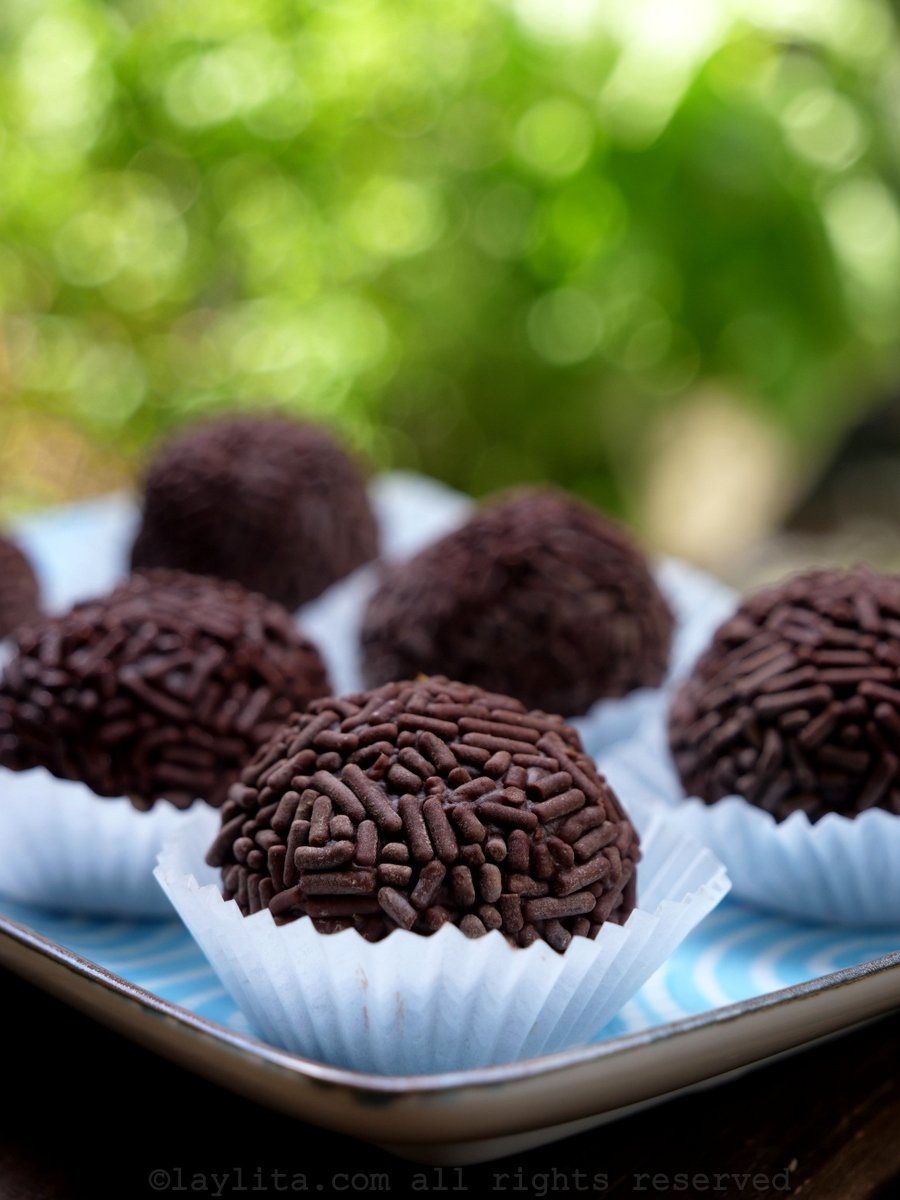 These tasty and addictive sweets are soft and fudge-like on the inside with crunchy chocolate sprinkles on the outside. More than a just a simple sweet candy, the brigadeiro has become a way for Brazilians to show affection, specially to kids, but most adults can’t resist to the charm of this delicious treat.

So much that nowadays brigadeiros are given as gifts. Because almost everybody likes it – actually, some people don’t like it so much or, worst, they prefer the white variation. But that’s ok, because a few years ago, a new trend was born, the “gourmet brigadeiro”, with new flavors such as lemon, passion fruit, cinnamon, ovaltine (malted drink), powdered milk, strawberry (also called “bicho-de-pé”), nuts, guava jelly and cheese. There are even more sophisticated variations, inspired by world cuisines, like crème brûlée brigadeiro and the ginger brigadeiro.

But the traditional chocolate brigadeiro is unbeatable. It’s made with only three ingredients (actually, only two are essential), it’s very easy to make and is ready to serve in less than 20 minutes. Chocolate or cocoa powder, condensed milk and butter or vegetal cream (margarine), a small pot and a wooden spoon: that’s all you’ll need. Once it has cooled down, all you have to do is mold it into little balls and cover them in chocolate sprinkles. 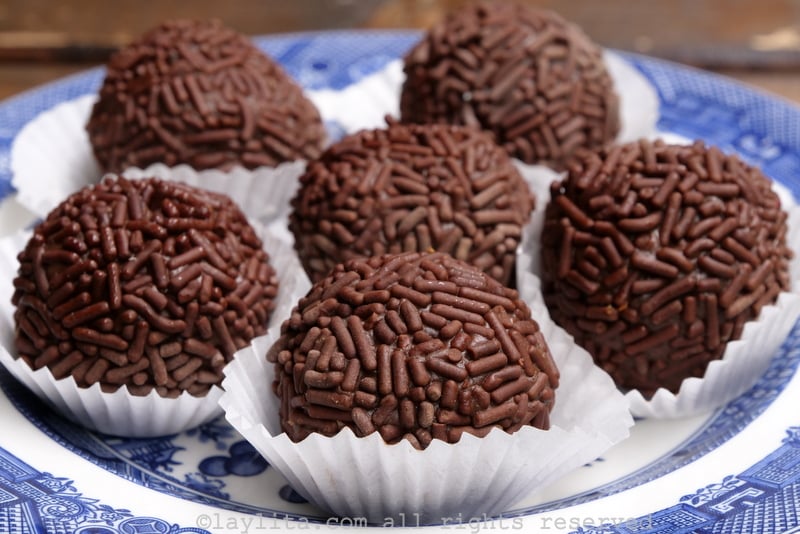 Although it’s high in calories and it has a lot of sugar, condensed milk is the base of many Brazilian desserts. When I was younger, I thought it was the base of desserts and sweets all around the world. When I lived in Switzerland, I missed condensed milk and couln’t find it at the local stores. One day at a friend’s home, who already lived in Europe for more than ten years, I asked her where I could find it.

She told me that “almost nobody likes it” there, and sometimes they use it in coffee (Oh God). I found it in a tube at the market, so hidden that we had to look for it. In Brazil, we have many shelves full of condensed milk, made by many brands, but there’s one brand that is the favorite one. Ironically, a swiss brand. I don’t get it. 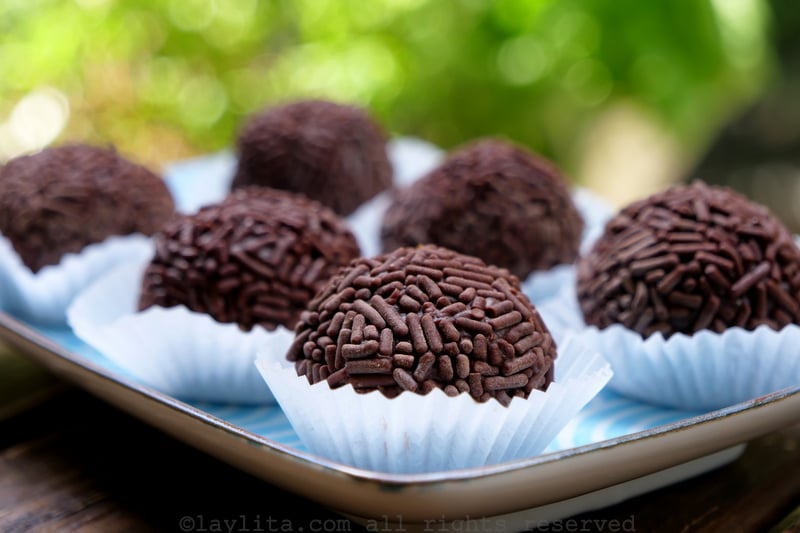 Last week, I asked my sister, who lives in Germany, how they relate to condensed milk. She told me that it’s almost forbidden there (!) because it’s full of sugar (indeed), and it barely has nutrients. She goes to chinese markets – which “sell everything” – and to Brazilian or Portuguese stores to buy her condensed milk can, so sacred for us as the “farinha láctea” (also despised over there), Antartica guaraná and “cuzcuz” (corn flour), as well as manioc flour and beans.

So, how to reconcile the fact that a product almost forbidden in developed countries is so loved in Brazil? We give condensed milk to our children, and we eat almost every week something made with it, be it in our “pudim”, in sweet treats, cake fillings, cold desserts. We even make “doce de leite” with condensed milk.
I think the solution is moderation. We can’t eat only condensed milk, as well as we shouldn’t eat too much chocolate or hamburguer, or french fries. I know condensed milk is unhealthy. But I’m sure that, when I have children, I’ll make them brigadeiros. I think there’s more to food than only the ingredients. There’s the love we put in it. And brigadeiro is full of love. 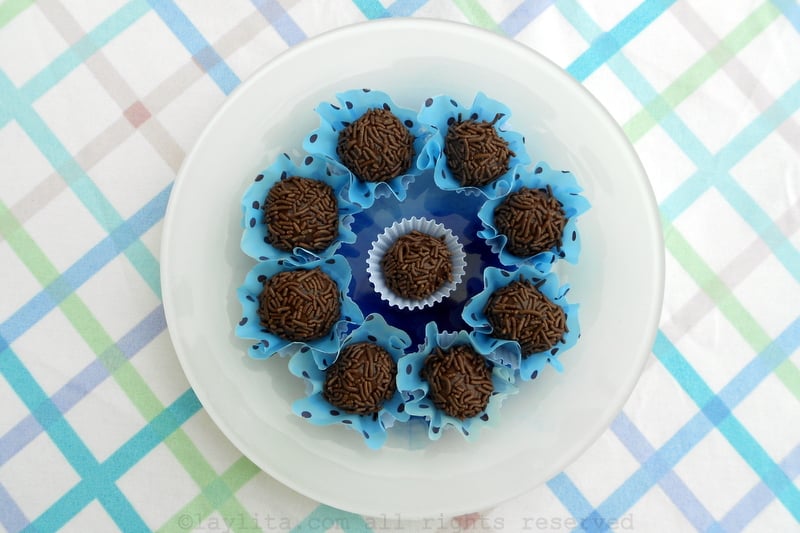 In this post, I included the recipes of the traditional chocolate brigadeiros, and suggestions for some of the most common variations: coconut (beijinho de coco), cashew (cajuzinho), strawberry (bicho-de-pé), bem-casado. You can also find the recipe for homemade condensed milk – which you can adjust the amount of sugar to your preference. You can also make a vegan variation of brigadeiros using soy condensed milk, and replacing the butter with margarine or a vegan butter. You can find soy condensed milk in vegan stores. It’s more expensive, but I find it tastier than the traditional, because it’s lighter and less sweet.

I hope you enjoy this recipe! 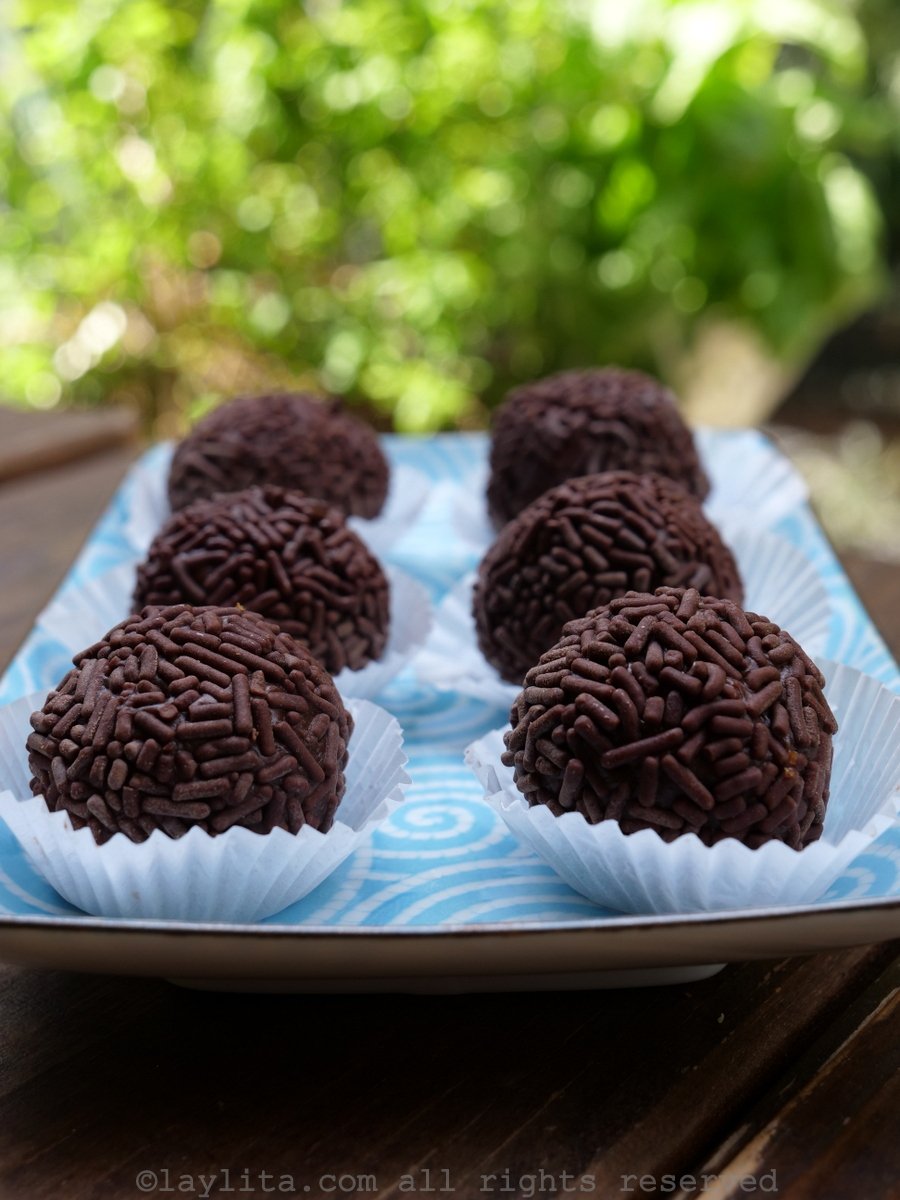 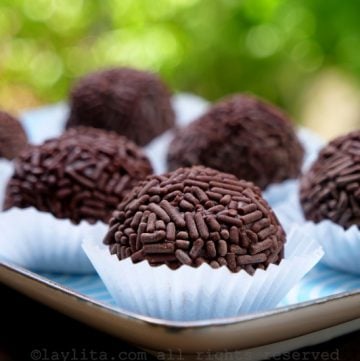 For the traditional brigadeiros:

Instructions for the homemade condensed milk: 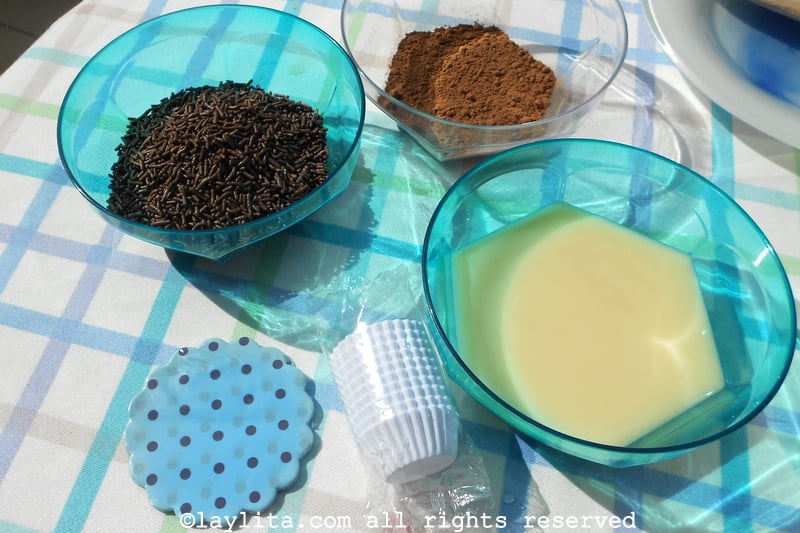