This is a basic recipe and instructions for cooking dry hominy corn from scratch. Hominy is known as mote in Ecuador, it’s called “maíz peto” in Colombia, and “maíz pozolero” in Mexico and Central America,

Mote corn or hominy, is made from dry corn that is “peeled” by soaking and cooking it with calcium oxide, also known as cal in Spanish or quicklime in English. My mom used to make mote using dry unpeeled corn, she had this huge pot and would put it on a wood burning stove in the little hut (which she called her fabrica or factory) next to our house.

The process to “peel” the dry corn would take a whole day, once the corn was peeled she would boil it until it was puffy and soft. The type of corn that grows in the Andes – actually there are several different varieties of corn -, but the most common type is different than the one found in the US (and Europe),the kernels are larger, drier and not as sweet. I was so shocked at how sweet American corn was the first time I tried, I was sure someone added sugar to it, and while I’ve grown to like sweet corn it is still a challenge to adapt certain Ecuadorian corn based dishes using local corn, but it works out.

In the late 90’s, when I moved to the US, it was very hard to find mote or hominy and the only kind I could find was canned and already cooked,which was convenient because you just had to drain it, rinse it and use it, however the flavor of freshly cooked mote was missing.

Recently I discovered that it is possible to find the dried mote – which has already been “peeled”-and is ready to be boiled, the corn has to soak overnight and does take a few hours to cook, but it is so worth it! After eating this way it is very hard to go back to the canned version – but I still keep a can of hominy on hand just in case I have a last minute craving or need it quickly.

You can find the dry peeled corn at some of the Latin grocery stores, it is called Maiz Mote Pelado and comes in 1lb bags – usually next to all the dry beans/peas – you soak it overnight and boil it (just like you would with dry beans).

Hominy is a great side dish, in Ecuador it is frequently served as a side to a lot of different meat dishes; simply add some salt (if needed) and it is ready. If you want to give the hominy a little bit more flavor you can also make a quick refrito (onions, garlic and other spices sautéed in oil or butter) and mix it with the hominy. A classic dish in the Andean highlands is mote pillo, a dish of hominy and eggs, it is one of the best breakfast dishes.Hominy is also added to soups and can also be ground to make dough for empanadas or tamales. 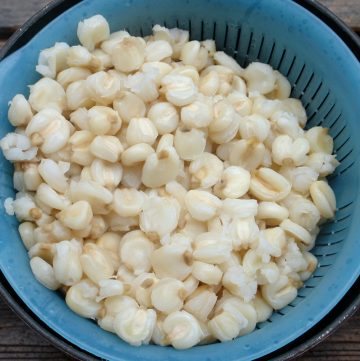 Step by step preparation photos for cooking hominy corn or mote at home:

Some of my recipes that use hominy or mote: