This is my easy recipe for apple empanadas with a spiced cinnamon dough. These sweet empanadas are baked and topped with cinnamon sugar.

These dessert empanadas are a type of baked hand pie or fruit turnovers. I’ve made several variations of apple empanada recipes, some using a simple sweet empanada dough, but I love the extra flavor that the cinnamon adds to the dough – as well as a hint of lemon zest.  You can also replace the cinnamon with pumpkin spice or add some ground cloves, all spice, etc to the dough. Feel free to make it your own and infuse it with the flavors that you love. For a cheater easier version, you can also use store bought empanada discs or pie dough, but the homemade dough is definitely worth the extra effort.

The apple filling can be prepared in different ways, for this recipe I’m using the easiest option which consists of fresh diced apples tossed with a mix of brown sugar and cinnamon. Another filling option is to pre-cook the apples with a type of unprocessed brown cane sugar called panela, also called piloncillo or papelón. You can also make a sweet empanada variation filled with apples plus dulce de leche or milk caramel.

I prefer to bake these apple empanadas, but you can also fry them if you prefer. In that case I would recommend using the empanada dough for frying (you can still flavor it with ground cinnamon). These apple empanadas are brushed with butter and sprinkled with cinnamon sugar when they come out of oven.  You can serve them alone or with a sweet dipping sauce. I made a very simple dulce de leche sauce to go with them. A simple crème anglaise custard sauce would also make great accompaniment. Even straight up dulce de leche works as well. 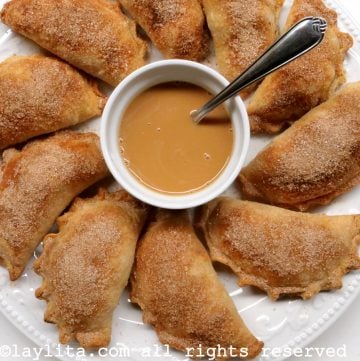 For the spiced cinnamon empanada dough:

For sprinkling on top:

To make the cinnamon empanada dough:

To shape the sweet empanada discs:

To make the dulce de leche dipping sauce, in a small saucepan heat up ½ cup of cream (or half and half) and stir in 4 tablespoons of dulce de leche, mix well until you have a smooth sauce. You can also add a teaspoon of vanilla.