Easy recipe for a quinoa and cheese soup, this Ecuadorian style locro soup is made with quinoa, potatoes, cheese, milk, onions, garlic, cumin, oregano, achiote, and topped with cilantro and avocado.

This comforting quinoa and cheese soup is a variation of the locro potato soup that I grew up eating in Ecuador. It is made with quinoa, potatoes, cheese, milk, onions, garlic, cumin, oregano, achiote, and topped with cilantro and avocado.

The first step to making a good soup is the refrito, also known as sofrito, which is the base of the soup, in this case it’s a very simple version that consists of heating oil or butter –or sometimes lard – and adding onions and garlic. Other veggies like tomatoes, peppers or celery can also be added depending on the soup. Then you add the spices and seasonings you will use for the soup. I usually add ground cumin and achiote or annatto powder to my refrito. For this quinoa and cheese soup I also added some dry oregano.

This soup has quinoa – which is nutritious and all of that good stuff, but what I like about quinoa in soups is the texture, I love the way the little seeds pop in your mouth. The potatoes, cheese and cilantro are what give it that delicious taste that reminds me of the locro de papas soup. Whenever I make a soup that has potatoes in it, I like to add the potatoes to the refrito and let them cook for just a few minutes so that they get just a little bit browned and then add the water or broth.

I used queso fresco, which is a fresh Latin American cheese that you can find in most supermarkets. You can also use grated mozzarella or oaxaca cheese, diced, for a melty cheese texture. Another option is to use feta cheese, it’s little bit more salty so adjust the salt according to your preference. Like many other Ecuadorian soups I served this one with some diced avocado and hot sauce on the side. 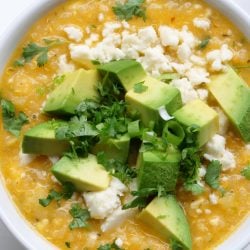 This soup will thicken from one day to another. If it’s too thick, you can re-heat it and add addition milk or water or broth. Adjust the salt/pepper accordingly.

Step by step preparation photos for quinoa and cheese soup: