I had this amazing dessert for the first time a couple of summers ago in a beach town in Costa Brava (Cataluña). We had dinner with the kids at a nice restaurant next to the beach and then went for a walk. For some reason we didn’t have dessert at the restaurant, but after walking for a while we thought it was time to have something sweet – or they were whining about not getting any dessert.

When we returned to the US I decided to make crema catalana, then I realized that I should have bought the round iron device to burn the sugar and the small cazuela molds in Spain. So for a while I just made it using ramekins and using a torch or oven broiler to caramelize the sugar. Then one day I was at one of my favorite stores here in Seattle, The Spanish Table, and found that they had the cazuelas and they also had the iron device.

I love using it and the kids think it is so much fun to watch the sugar burn. I also think that it makes the burnt sugar taste better and it is easier to keep the cream or custard cold than using the oven broiler.  To heat the iron I press it against the stove burner (just make sure the burner is clean) or on the stove flame (for a gas stove), you could also heat in the fireplace or grill.

We found a little ice cream shop and were about to get some for the kids when we found out that they only took cash (and we didn’t have any). We tried to find an ATM but it was nearly impossible so we started walking back to the hotel.

On the way there was a small restaurant, very noisy and full of people watching the Barcelona-Real Madrid match. We went in and asked if we could just order dessert, they said yes. I saw the crema catalana on the menu and had read about it my guide book as something good to try so I ordered it – it was so good! From then on I ate it as much as I could when while we were in Spain.

Now, apparently there is a dispute between Spain and France about which came first: crema catalana or crème brulee, each side claims that the other stole the original and changed the name.  While they are very similar, the crema catalana is cooked on the stove instead of the oven. Also one of the things I love about the crema catalana is the way the sugar is burnt or caramelized: using a small round hot iron. 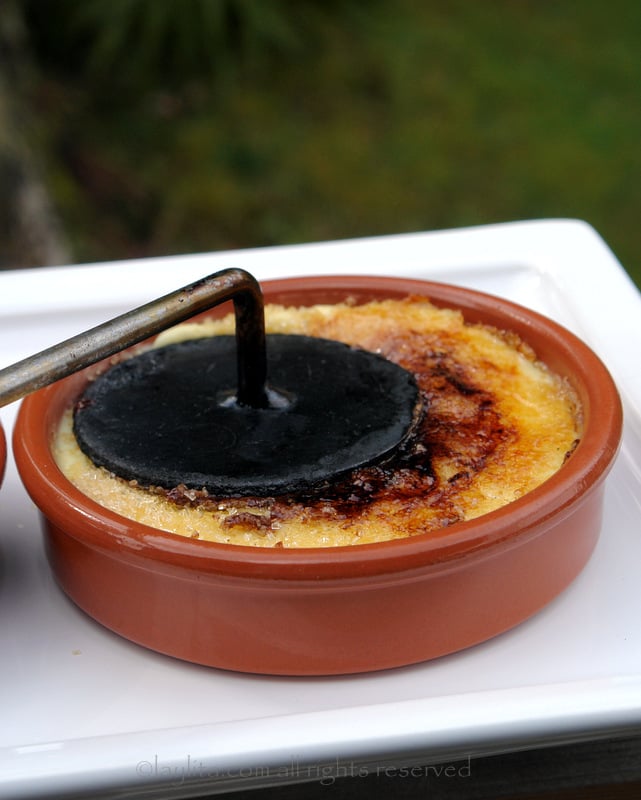 Crema catalana also uses citrus peel (orange or lemon) to flavor the custard. You can also use cinnamon, I don’t always use cinnamon mainly because my husband has this weird anti-cinnamon thing going on.  This Spanish dessert is also lighter than its French counterpart, I made it using a 2:1 ratio for milk to cream, to make it even lighter you can make it just with milk, but use whole milk.

Crema catalana is traditionally served on March 19th in honor of San Jose (Saint Joseph), which is a big holiday in Spain – equivalent to Fathers day. I’ve been meaning to post this recipe for a while now, and was reminded about it when I checked Facebook this morning and someone was wishing a happy day to everyone named Jose. Feliz día de San Jose!