Horchata lojana is a tea type drink made from a variety of herbs and flowers including escancel or bloodleaf, lemon verbena, lemon grass, mint, chamomile, lemon balm, rose geranium, among others.

If you’ve heard of horchata before, but you haven’t been to Ecuador, then you are probably familiar with the Spanish version, an almond rice drink or the Mexican variety, also made from rice. In Ecuador, horchata is a very different drink – think bright pink red vs the Spanish or Mexican white horchata.

In Ecuador, horchata is actually an herbal tea drink made from a mix of herbs and flowers; it is a typical drink from the province of Loja. It is very common to find horchata stands in the morning selling tall glasses of this warm sweet drink, it is also served as a cold drink with lunch or other meals. The herbs and flowers that are part of this drink include some better known herbs such as chamomile, mint, lemon verbena, lemon grass, and lemon balm.

Some of the flowers that are included in this tea are rose geranium, small roses, violets, begonias, carnations, fuschias and malva olorosa/malva blanca – which are flowers from the mallow family. The horchata herb mix also includes some lesser known and harder to find herbs which include cola de caballo or horse tail –also known as shave grass-, llanten or plantain plant (not to be confused with plantain bananas), borraja or borge, linaza or flax, a red leafed herb called escancel, in English it is known as bloodleaf, this herb gives the drink its red pinkish color. Another plant used in this tea is called ataco or red amaranth, this one also contributes to the color of the drink. There are a few other plants that are used, however these seem only grow in Ecuador and, at least according to my mom, don’t have known names in English, in Spanish they are called pimpinela, shullo, and cucharillo.

When you buy a glass of this drink at the stands in Loja, you also have the option of having them add liquid extract of savila or aloe vera, think of it as a super power boost for the horchata; I’ve always passed on it as I don’t like the idea of adding something slimy to my drink. 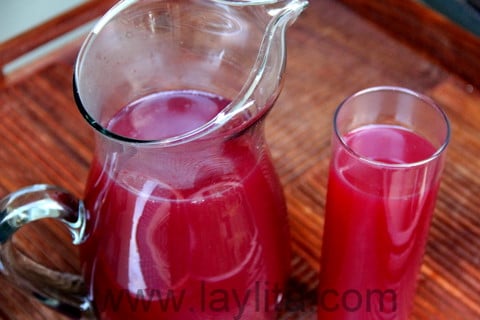 There aren’t exact proportions around how much of each herb or flower is used in the tea, it’s just a little bit of everything, and the herbs can be fresh or dried, or a combination. Growing up in Ecuador we had many of these growing in the backyard, if any were missing we would use dry ones; however now it is very common to find packets of horchata mix already dried and ready to mix with boiling water. I even found individual tea packets last time I was there.

I always stock up on horchata mix whenever I visit Ecuador, if you are interested in making it from scratch in the US you can easily find the first batch of herbs and some of the flowers, however escancel or bloodleaf is impossible to find so it will likely lack the color, however most of the flavor comes from the lemon verbena, lemon grass, mint, chamomile, lemon balm and rose geranium – so even a tea made from the mix of these will have a wonderful taste.