I originally made these caramelized pears, or dulce de peras, as a filling for gingerbread dough empanadas. I had some leftover and just loved how good they were as a topping for desserts and sweet breakfast dishes. I grew up eating “dulce de frutas” or “frutas pasadas” which means fruits that are caramelized or cooked in a syrup of spices and panela (piloncillo). Panela, as we call it in Ecuador, is a type of unprocessed brown sugar made from boiling sugar cane juice. It’s known as piloncillo in Mexico, and has many other names (depending on the region/country). You can find at Latin grocery stores or online.

The most common fruits (and veggies) that we used in Ecuador to make dulces are figs, squash, pineapple, tree tomatoes (tamarillos), guavas, chayote, other local fruits like babaco, toronche, tumbo, grosellas (a type of gooseberry), uvilla, pechiche/capuli, etc . I’ve pretty much tried the same method with a variety of fruits here in the US and it works great – you just have to be extra careful with fruits that are more delicate. Some other fruits, in addition to those already mentioned, that you could use include persimmons, peaches, plums, apples, strawberries, citrus, cherries, papaya, etc.

You want to keep the fruit either whole (for smaller fruit) or cut into halves/quarters (for larger fruit). One of the most important tips to help keep the fruit maintain their shape and not become a mush (which would then be more like a jam), is to minimize stirring (only do so very gently and to re-arrange the fruits if needed) and keep the syrup boiling. You can customize the spices based on your preference and can even add additional herbal or aromatic flavors: orange peel, orange leaves, lemon verbena, cardamom, vanilla – that you think would go well with the fruit you are caramelizing.

You can serve these spiced caramelized pears as a topping for crepes, pancakes, French toast, or with ice cream. They can also be served as a dessert on their own – either alone or with a slice of queso fresco (Ecuadorian style) or with a little bit of crème fraiche to balance out the sweetness. You will also have a decent amount of the spiced panela/piloncillo syrup with the pears; you can also just use the syrup to drizzle on top of desserts (or anything you want). 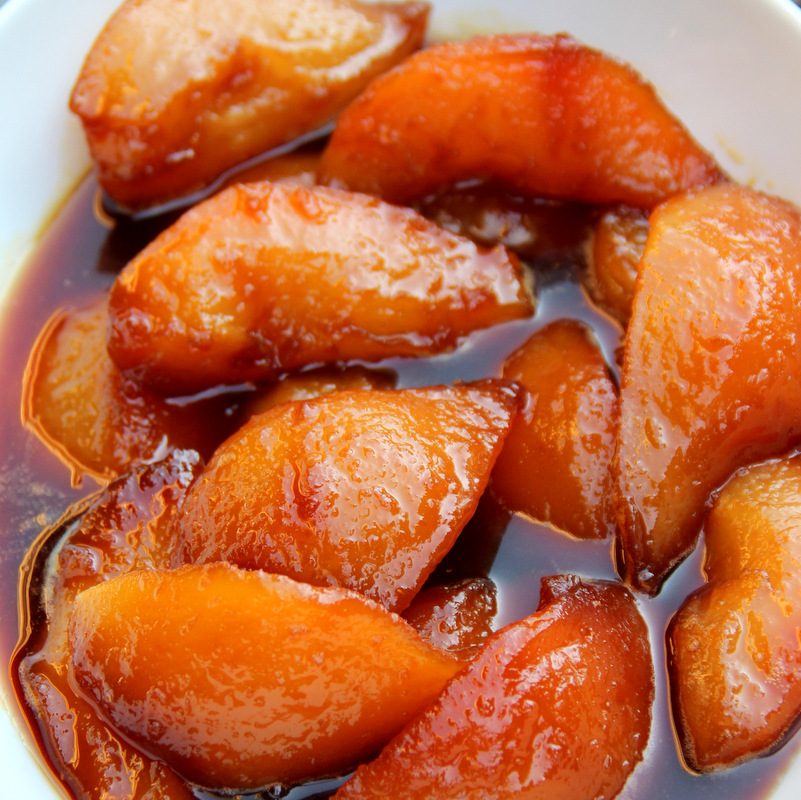