Intro: I would like to introduce the newest contributor to this blog,  my wonderful husband Nicolas.  This is his grandmother’s recipe for potato gratin dauphinois, a traditional dish from the French Alps made with thinly sliced potatoes baked in a sauce of milk, eggs, cream and garlic and topped with cheesefrom.  Nico is the occasional cook in the house. He grew up watching his family prepare traditional French recipes and since he lived in different parts of France over the years, he got to see specialties from various regions. His favorite recipes are simple, quick and easy to make, he refuses to cook anything that would take more than 2 hours to prepare. I hope you enjoy his recipes. ~Laylita

Gratin dauphinois is a typical dish from the French Alps made with thinly sliced potatoes baked in a sauce of milk, eggs, cream and garlic and topped with cheese. A bit of etymology. The Alps have a region called Dauphiné which includes 3 French counties: Isere, Hautes Alpes and Drome. The adjective derived from the Dauphiné region is called Dauphinois, such as the inhabitants or for the recipe at hand, the dish. Gratin comes from the French verb “gratter” which means to scrape or grate (e.g. cheese or potatoes).

So its name and regional roots make the gratin dauphinois an excellent winter dish that is tasty, nutritious, and particularly appreciated in mild and cold months. It is a popular menu item in local restaurants in the Alps and a top pick from hikers and skiers to replenish their energy levels after a day on the mountains.

I spent several years of my childhood in the French Alps in a town called Saint Jean de Maurienne, in the county of Savoie. It is nested between mountains in the middle of a valley crossed by the Arc river. The town is known for its traditional industries such as old style knives (“Opinel”), tourism as a hub for skiing and mountain activities, as well as a fast route to Italy, now less than 90 minutes away using the new highway that takes drivers straight through a long tunnel underneath the Alps, and into Italy (“le tunnel du Frejus”).

During these years, I lived with my Grandma who herself was born in Sicily and had spent most of her life near Saint Jean, in France. For several years she had a mountain restaurant in a very tiny village called Albiez, right above Saint Jean. The mountains carry spectacular views. The climate is continental, which means that summers are hot and winters very cold with lots of snow. Food is inherently tied to people’s customs, the ingredients available, and of course, influenced by the climate.

Back to my Grandmother Ernestine, she made this dish while having her restaurants and later on at home after she retired. I can remember the smell of potato gratin baking in the oven when I was 9 or 10 years old. Coming back from school and opening the apartment’s door always carried a hint of the meal to come. I knew what she was up to, and it felt what we experience when entering a home environment when someone is cooking for the family. Tasting the dish for many years and observing her, I grew a taste for gratins and have come to cook it myself over the years, now that we have our own kids and family to feed.

Great companions for a gratin include red or white meat dishes, such as chicken or daube. This easy to make potato gratin is also a great option for a vegetarian meal. Pair it with a green salad for appetizer and a glass of medium to full bodied red wine and you’ll have a great menu. 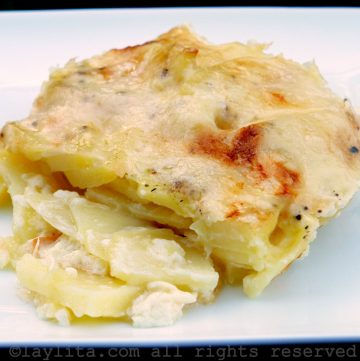