This mouthwatering recipe for salmon tartare is a French variation made with raw salmon, olive oil, Worcestershire sauce, whole grain French Dijon mustard, parmesan, and basil. This post was contributed by Lucas Delmas.

In my family and social circles, we like to make this salmon tartare appetizer. In addition to being quick and very tasty, you get to experience the same freshness and silky texture as its beef counterpart. While the main ingredient differs, other parts of this dish are also distinct, as we will explore in this recipe.

There is sometimes apprehension in eating meat or seafood which is raw (of course you should always avoid raw fish/meat if you have been advised to do so by your doctor or if you have any doubts please consult your doctor first). Naturally, the freshness of your ingredients is very important.

Other ways to pick a great piece of raw salmon include checking for a fresh scent, as well as a relatively firm consistency to the touch. Wild king salmon tops the list as one of the best options for salmon tartare due to its amazing silky texture. However request the freshest option that is available and choose a section that is fully de-boned to make the preparation easier.

Laylita’s taste testing notes: I’ll admit that I was a little bit skeptical about adding whole grain mustard and parmesan to a salmon tartare, but it worked very well. I especially loved the contrast that of those tiny bits of texture and flavor from the whole grain mustard with the salmon. 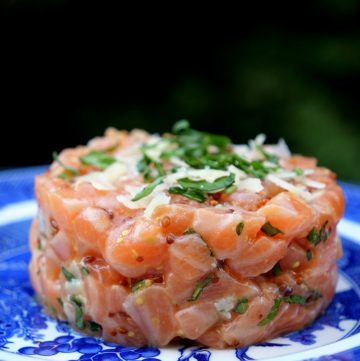 Since you are using raw fish it is important to do the chopping carefully, but as quickly as possible. If needed you can cut the salmon ahead of time, mix if it with the olive oil and mustard grains. Let it rest refrigerated (covered tightly with plastic wrap) until ready to serve, then add in the Worcestershire sauce, parmesan, and basil.

If there is a myth to debunk about salmon, it is the belief that the brighter colored it is, the more fresh it is. However, the color of fresh salmon can vary based on many factors including the waters where it lived – Atlantic vs Pacific o even North Pacific like Alaska vs Pacific South American salmon can look very different. Just in the PNW region of the US there are many varieties from the highly prized King or chinook salmon, to sockeye (known for its natural bright red color), coho, pink and chum salmon.

Even the Alaskan King salmon can sometimes have white flesh, apparently 1 out of 20 will have white instead of pink flesh. It’s known as Ivory King salmon and it’s usually a big deal when featured as a restaurant special – and even bigger deal when you find it available at your local grocery store . Salmon are considered anadromous fish, because they can live in both salt and freshwater – they basically are born in freshwater rivers, then travel to the ocean and live there most of their adult lives.   They return to spawn in freshwater and usually die shortly after.