Easy recipe for Ecuadorian fish ceviche {ceviche de pescado ecuatoriano} made by marinating or cooking raw fish in lime juice and mixing it with onions, tomatoes, peppers, and cilantro.

This is my friend Mafi’s recipe for Ecuadorian fish ceviche or ceviche de pescado ecuatoriano. This fish ceviche is made by made by marinating or cooking raw fish in lime juice and mixing it with onions, tomatoes, peppers, and cilantro. Mafi learned how to make this ceviche from her dad and she showed me how to make it years ago when we both lived in Austin. Her original recipe used only green bell peppers, but any type of bell pepper will do, so I usually add a yellow or orange one to add some additional color. She used white onions, mainly because she isn’t a fan of onions, but I prefer to use red onions.

I love ceviche. I just hear the word or see a picture of it and my mouth instantly waters. I also have an untested theory that a ceviche diet would be the best way to eat delicious food and loose several pounds at the same time (but you would need to avoid the crunchy fried garnishes). Ceviche, also known as cebiche or seviche, is a typical dish from the coast in Ecuador. Obviously it is also very popular in other Latin American countries and there a lot of different variations. However we like to think that ours is the best – I’m sure other countries make the same claim (and I’ll probably get trolled by one particular country that thinks they own exclusive rights to ceviche).

Even within Ecuador, there are several different ceviche versions made with all types of seafood and additional ingredients. Several coastal cities are always arguing about which one makes the best ceviche. Personally I find that as long as fresh ingredients and good quality fish are used, they’re all good. It just comes down to your preference, which might be the variation that you grew up eating.

There are restaurants and places that will sometimes pre-cook the fish by blanching it with boiling water. I’m not a fan of that method, so I always ask before ordering how they make it. I used to think it was just people being lazy, but it’s more being overly cautious about raw fish. It is changing, but people in Ecuador are sometimes very hesitant about eating raw fish (but sushi is becoming very popular) or even having a medium rare steak (I’ve seen so many people send back steaks if they have any bit of pink).

Ecuadorian fish ceviche is usually made using corvina, also known as merluza, which is similar to sea bass. I used to find actual corvina in Austin at Central Market but I haven’t yet seen it in Seattle (plus there is such an amazing fish selection here). I was using tilapia, red snapper, sole, or mahi mahi until my dad told me that halibut was closer to corvina. So I tried the fish ceviche with halibut and it worked perfectly. Halibut has the perfect consistency and also visually turns into a very nice white color when cooked in the lime juice. You can use any white fillet fish that will maintain a nice firm consistency. Next time I’ll introduce you to my brother’s version of fish ceviche (ahh my mouth is watering).

Ecuadorian fish ceviche is served with sides or garnish choices of patacones or thick fried green plantains, chifles or very thin fried green plantain chips, maiz tostado or corn nuts, and/or popcorn, plus some aji hot sauce for those who want a spicy touch. Ceviche also known as one of the best hangover cures (not that I need those anymore…). 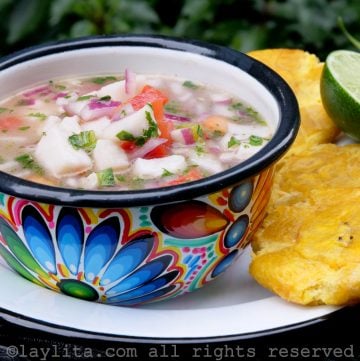