This is my recipe for a traditional Ecuadorian chicken rice soup, called aguado de gallina o pollo. It’s a thick soup made with chicken, rice, potatoes, onions, peppers, other vegetables, herbs and spices.

The literal translation of aguado is watery or watered down, which is ironic because this is actually a very thick chicken soup, almost a stew, but still a soup. The first time Nicolas tried this soup he commented that he liked it and asked what was in it (besides de chicken obviously). When I mentioned that it had rice he was surprised, aguado de gallina soup, like many other Ecuadorian poultry dishes is slow cooked until the chicken is extremely tender. The rice practically dissolves into the soup thickening it. The rice also gives the aguado a very creamy and almost sticky consistency.

The very traditional way to cook this soup is very simple and only uses chicken, rice, potatoes, onions, and spices, my version is a little bit more modern as bell peppers, tomatoes, carrots, peas and herbs are added to the soup. The traditional version also uses water instead of chicken broth.

It’s hard to explain the main reason I don’t stick to the traditional aguado chicken rice soup recipe, in Ecuador we have “pollos” and “gallinas”. Pollos are chickens that are younger and are usually, but not always, raised in a more commercial environment. Gallinas are more like hens which are raised for their eggs, more often on farms or just in your backyard. It is said that the meat from a pollo is more tender, which makes sense because it is younger, however it lacks true flavor. On the other hand, the meat from a gallina is much tougher but is full of flavor, so in order to get a really true flavorful chicken dish you have to use a gallina, the older the better they say, and to tenderize it you must cook it slowly.

If you taste a traditional aguado de gallina in Ecuador made with a nice old hen it will be one of the most tasty dishes with a very strong chicken flavor. Well, I have tried chicken meat from Whole Foods, farmer’s markets, etc and none of them can match the Ecuadorian gallinas, which leads to the conclusion that most of them are pollos. So to get as much chicken flavor as possible, I make the soup with chicken broth and add additional ingredients to improve the flavor. So, technically I should really call this chicken rice soup an aguado de pollo, instead of a true aguado de gallina – but regardless it’s still one of the most delicious and comforting chicken soups. 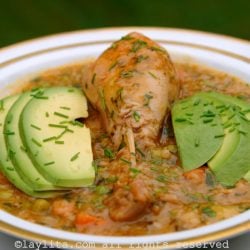 These days even in Ecuador you are probably more likely to find this soup made with pollo than with gallina, especially in the larger cities. However, if you find yourself in small town where people raise their own chickens you just might get to enjoy an authentic aguado de gallina.

During my last visit to Ecuador, I had the best aguado de gallina that was cooked in small hut (no electricity) in a clay pot over a wood burning stove, and prepared with the freshest chicken- and by freshest I mean that it was walking around outside when we arrived. As with most other Ecuadorian soups, I served this aguado chicken rice soup with avocado slices, you can also sprinkle it with some chopped chives or chopped green onions and serve some ají hot sauce on the side.