My first memory of seco de chivo or Ecuadorian goat stew is when I was very young (maybe 5 or 6). We went to a nearby village for their fiestas or annual festivities. Everyone was talking about how this town had some of the best seco de chivo in the area and they only prepared it during their fiestas.

There are several versions of seco de chivo, most of the ingredients are very similar, but one of the variants is the type of drink or beverage used to prepare the stew. I’ve had it prepared with chicha, an Andean fermented corn drink, as well as with beer, which is more common now because it is easier to find beer than chicha. Another option is fruit juice, specifically a fruit called naranjilla (also known as lulo in Colombia), which is a very tart fruit that can be found mainly in Ecuador and Colombia.

The taste of the goat stew will vary based on which drink you use, in my opinion they all taste great, but there are people that have very strong preferences on how they like their seco de chivo prepared, the most traditional preparation is using chicha.

Originally when I was planning this recipe I was going to make either with beer or naranjilla juice because I knew I could find frozen naranjilla pulp and even frozen naranjilla fruits. However, to my surprise I actually found chicha when I went to the Latin grocery store, it does come from Peru so it is slightly different than the Ecuadorian chicha, but it is close enough.

So this time I am preparing the seco de chivo with chicha – you can replace the chicha with beer as the quickest option. I’ve also found that a combination of beer, white wine and a bit of orange juice work well as a chicha replacement option. Chicha is also very similar to cider, so a fruity semi-dry cider could also be used.

Another ingredient used to make this dish is called panela or piloncillo; it is hard brown sugar and comes in a brick shape (though I’ve also seen it in cone shape). Panela is made directly from sugar cane juice, in Ecuador it is made in trapiches, which is a very rustic processing factory.

We had a few trapiches close to our farm and we had a small field of sugar cane. When it were ready to harvest the canes are cut with machetes (the bases are left and grow back). Then the sugar cane is loaded unto donkeys (which are wearing these special wood devices to carry the sugar cane).

Next the sugar cane is taken to the nearest trapiche, where it first goes through a press that squeezes the juice out. The juice, which is called guarapo (and is delicious mixed with bitter orange juice as it’s own drink), is then cooked in these large rectangular metal devices (that have fires going underneath) and stirred with these huge wooden spoons (that almost look like kayaking paddles).

It goes through several different of these cooking stages until at the end you have a very thick syrup. Which is then poured into small brick shape wood molds. Once the panela dries it hardens and the molds are removed.

It is a very interesting process and just the trapiche part takes about an entire day, and of course as a kid you get to drink some guarapo and taste the cane juice syrup. In Ecuador we use panela as most people would use sugar: to sweeten coffee, tea, juice, to bake and to make marmalades or fruit preserves.

The panelas are kept in their hard brick form until ready to use and then they are melted down with water to make a syrup called miel de panela (panela honey) which is used to sweeten things, or it is also grated when used in certain dishes or for baking. Panela can be found in most Latin grocery stores or even in certain mainstream grocery stores.

Enough about panela, another interesting thing about seco de chivo and goat meat in general is that when it is prepared the correct way it should not have a goaty flavor (which you usually find in goat cheese) and it should also be very tender, which is why it is braised or cooked very slowly over low heat. Seco de chivo is served with arroz amarillo (rice cooked with a little bit a achiote or annatto powder to give a yellow color), fried ripe plantains and avocado slices. 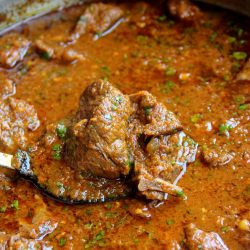 Some alternatives to naranjilla juice (in case you can’t find it), include passion fruit concentrate (or juice, but omit the panela if the juice is sweet), tamarind juice or paste diluted in water, or even just a mix of fresh orange juice and lemon juice.