Easy recipe for layered gelatin flag popsicles made with flavored gelatin or jello, water, and sugar. The perfect treat for a national holiday or watching sporting events.

A few tips and observations from making these gelatin layered popsicles. One of the positive side effects of using gelatin is that the popsicles don’t melt as quickly – which is perfect for warm summer days. 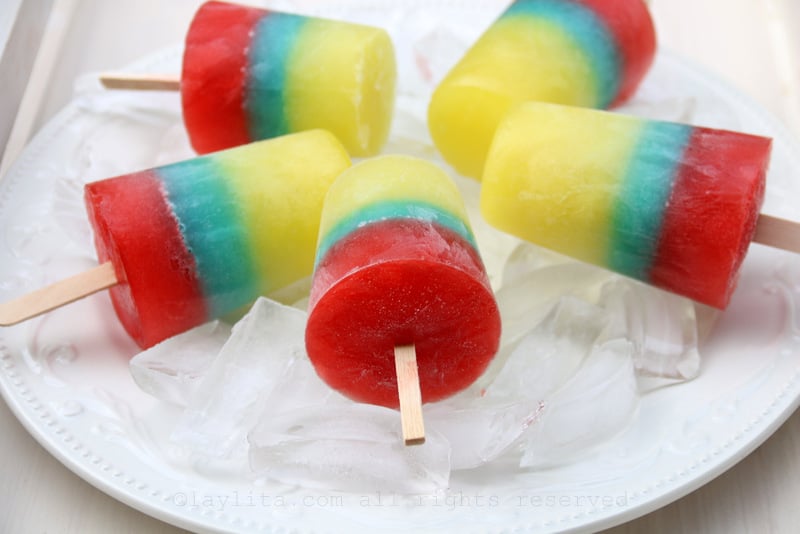 Gelatin popsicles are very popular in Ecuador. I grew up buying helados de gelatina from the local stores or tiendas, so they bring back a lot of childhood memories. When making them, you need to let each layer get almost frozen before adding the next layer, but don’t let a layer get overly frozen because it could prevent the next layer from sticking to it.

This recipe for gelatin flag popsicles can be easily adapted to represent the flags of different countries. Simply change the colors/flavors of the gelatin based on the country’s flag. My kids loved these and are also supporting Ecuador. However, since they are both born here in the US, they are also supporting their home country – and torn about the possibility of both Ecuador/US playing together – and if that happens I would be thrilled because it would mean that both teams would be playing in the quarterfinals. They also requested red, white and blue popsicles to support the USA team, so I decided to make that variation using berries and will be posting that recipe soon (I hope). 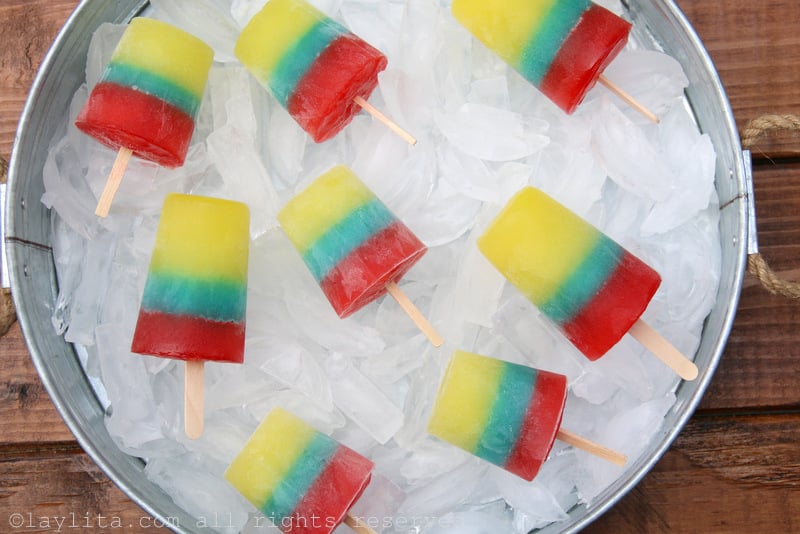 In case there is any doubt, my number one team is Ecuador. I also support the US and all the teams from Latin America, but my beloved Ecuador, despite its underdog status and heartbreaking loss with Switzerland has my entire support, regardless of how far we make it. I will be screaming “Sí se puede” until the last second of the last game –and yes, the World Cup makes me overly dramatic.

So, obviously I made these yellow, blue, and red flag popsicles to represent the Ecuadorian flag, the phrase “amarillo, azúl, y rojo, la bandera del patojo” is the first thing that pops into my head whenever I think of the colors of flag. Of course, our neighbor country of Colombia, has the same colors on their flag, and they are also one my favorite teams, so you can also make them to support Colombia.

I originally made these layered gelatin flag popsicles to get my kids into the 2014 World Cup spirit, and now we’re making them again for the 2015 Copa America. I was planning to post the recipe sooner, but of course, as soon as the games started my productivity has dropped to zero – mainly due to exhaustion from screaming at the TV.

It’s an understatement to say that World Cup craziness has invaded our home. My husband, despite being French, is not a huge soccer/fútbol fan. Even though I complain about his lack of enthusiasm, he watches the games but doesn’t get as emotional as the rest of us; and I have to admit, it probably helps us keep some minimal balance of sanity around here.

Good luck to all the teams and remember to support your team regardless of the results. Soccer can be very unpredictable, which is both good and bad, but it’s important to remember that the guys playing are usually giving their all, even if they are sometimes injured or having problems. And sometimes, as we all do, they make mistakes, so try to be understanding. I do have a hard time applying this same forgiveness to referees though (sorry refs – you guys have the worst job). And don’t forget “Sí se puede!” until the end.

For the first layer of yellow gelatin:

For the second layer of blue gelatin:

For the third layer of red gelatin:

Other items you will need: