Colada is typically served with breakfast, lunch or as an after school drink for both kids and adults in Ecuador. The most basic version is made with oats, water, cinnamon, panela or hard brown sugar, and a very tart fruit called naranjilla, also known lulo in Colombia.There are other different variations of colada or refresco de avena. Some add milk. Some are made with different types of fruit such as pineapple, maracuya or passion fruit, babaco or mountain papaya. Some add additional spices and aromatic herbs.

There is also a very special version called colada morada or purple colada, which is made using purple corn flour along with purple or dark blue fruits, and a lot of unique spices; the colada morada is prepared especially for Dia de los Difuntos or Day of the Deceased on November 1st.

If you’re a regular reader of this blog or are pretty familiar with Latin American food you are probably familiar with panela or piloncillo. But for those who are wondering what it is, it is basically hard brown sugar and comes in a brick shape (though I’ve also seen it in cone shape). Panela is made directly from sugar cane juice.

In Ecuador it is made in trapiches, which is a very rustic processing area, we had a few close to our farm and we had a small field of sugar cane and when they were ready to harvest the canes are cut with machetes (the bases are left and grow back), then the sugar cane is loaded unto donkeys (which are wearing these special wood devices to carry the sugar cane),next the sugar cane is taken to the nearest trapiche, where it first goes through a press that squeezes the juice out.

The juice, which is called guarapo and is delicious mixed with bitter orange juice, is then cooked in these large rectangular metal devices (that have fires going underneath) and stirred with these huge wooden spoons (that almost look like kayaking paddles), it goes through several different of these cooking stages until at the end you have a very thick syrup, which is then poured into small brick shape wood molds, once the panela dries it hardens and the molds are removed.It is a very interesting process and just the trapiche part takes about an entire day, and of course as a kid you get to drink some guarapo and taste the cane juice syrup.

In Ecuador we use panela as most people would use sugar: to sweeten coffee, tea, juice, to bake and to make marmalades or fruit preserves; the panelas are kept in their hard brick form until ready to use and then they are melted down with water to make a syrup called miel de panela (panela honey) which is used to sweeten things, or it is also grated when used in certain dishes or for baking.Panela can be found in most Latin grocery stores or even in certain mainstream grocery stores.

Naranjillas or lulos are another essential ingredient for this oat drink, it is hard to describe the taste of this great fruit, but most of time when I meet someone who has been to Ecuador and we talk about the food I always hear how much they loved the fresh fruit juices, especially the naranjilla juice.Even this basic version of colada gets complicated when you live far away from fresh naranjillas, luckily though it is possible to find the naranjillas either frozen or the frozen pulp at many Latin grocery stores, which is not the same as using the fresh ingredient, but it is still very close. I even remember making colada with orange juice when I first moved to the US and could not find naranjillas anywhere.

This colada or fresco can be served ice cold or warm, most of time when we had it with breakfast it was just made and we would drink it warm, while in the afternoon when we got back from school we would have it cold, it also depends on what part of Ecuador you grew up in, if you lived in the Coast region you probably always had it ice cold, but if you lived in the Sierra or highlands you’ve probably had it both ways.Here in Seattle we like to drink it warm during the cold months and cold on those occasional hot days.You can also adjust the amount of water based on how thick or thin you would like the consistency of the drink, same thing applies to the amount of panela and how sweet you want the colada. 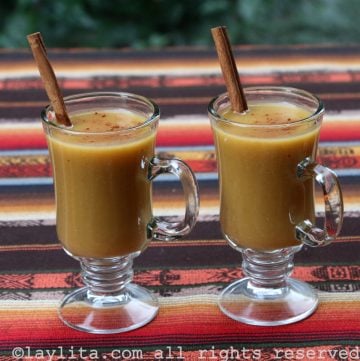