This is my recipe for pineapple flan, also known as flan de piña or queso de piña – a custard like dessert made with fresh pineapple juice, sugar, milk, eggs, vanilla and rum.

I enjoy a good flan every now and then, but if it were up to Nicolas we would eat flan every day. I also like to have a change from the classic vanilla flan and add different flavors to the flans. In Ecuador, especially on the coast, it is very common to find flans made with pineapple, coconut, mango, or other fruit. I’ve mentioned before that when I’m cooking for friends I like to make desserts that are relatively low maintenance and that can be made ahead so that I can focus on the appetizers and main meal; flan definitely falls into this category.

I used freshly made pure pineapple juice for this flan, you have to strain it and then let the foam rise to the top and remove the foam, but if you are in a hurry you can substitute with a good quality store bought pineapple juice, though you might want to reduce the amount of sugar for the flan if the store bought juice already has sugar. I used whole milk for this pineapple flan because I was out of evaporated milk and it worked just fine.

Whenever we made any type of flan with my high school friends we always used evaporated milk or condensed milk or a mix of both, I’m not sure why but a lot of Latin American desserts use them. We were talking about this with some friends from Mexico the other day and our guess was that it has something to do with marketing by a certain large Swiss food product company combined with the fact that not even a decade ago refrigerators were luxury items in many places so many dairy products are sold in cans and sealed bags. This recipe makes about 10 small individual flans, you can also use a large flan mold as well, just increase the cooking time. 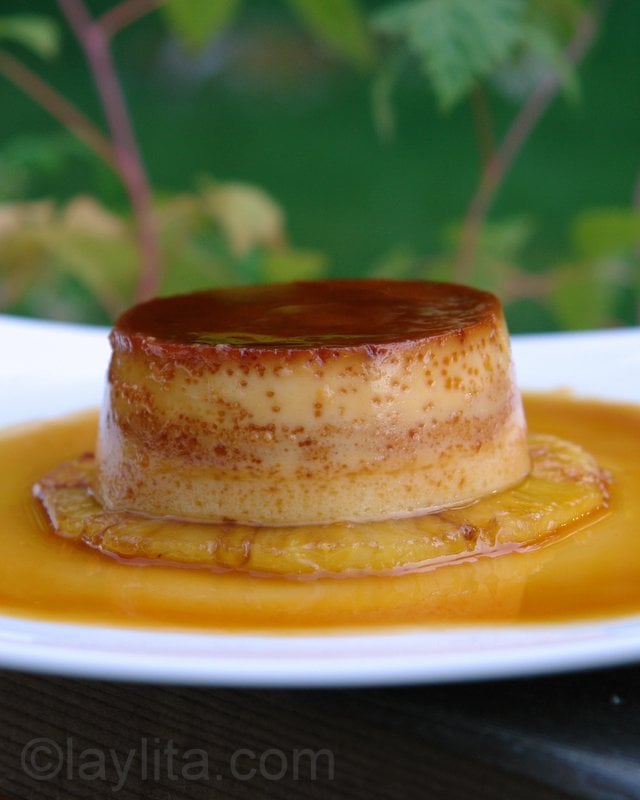