Guaguas de pan –translates literally as bread babies –are sweet breads shaped into doll like figures. When you look at the bread’s shape you will see that it is reminiscent of a baby swaddled in a blanket, the word guagua, sometimes also known as wawa, means baby in Quechua. It is a traditional Ecuadorian custom to have these breads, along with a purple corn & fruit drink called colada morada, on November 2nd for the Day of the Deceased (Dia de los Difuntos). The traditions around this holiday vary for one place to another, but the holiday is meant to honor the memory of relatives and friends who have passed away. 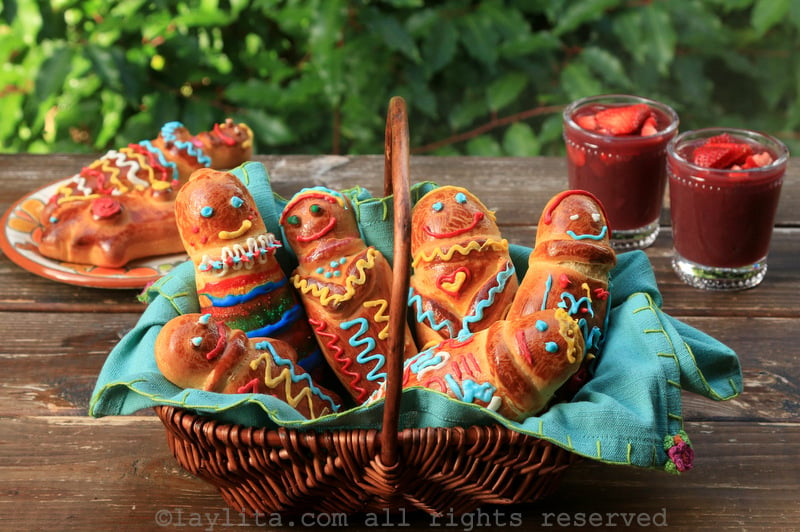 A friend from Guayaquil who has lived in the US for some time mentioned that he doesn’t remember ever seeing guaguas de pan when he was growing up. In my hometown of Loja, it is customary for godparents to buy their godchild a guagua during this holiday. These bread figures are also known as puerquitas – little pigs- in Loja, and they are usually shaped more like animals than babies.

To make the basic bread figures – without any filling:

To make “guaguas rellenas” or bread babies with a filling: 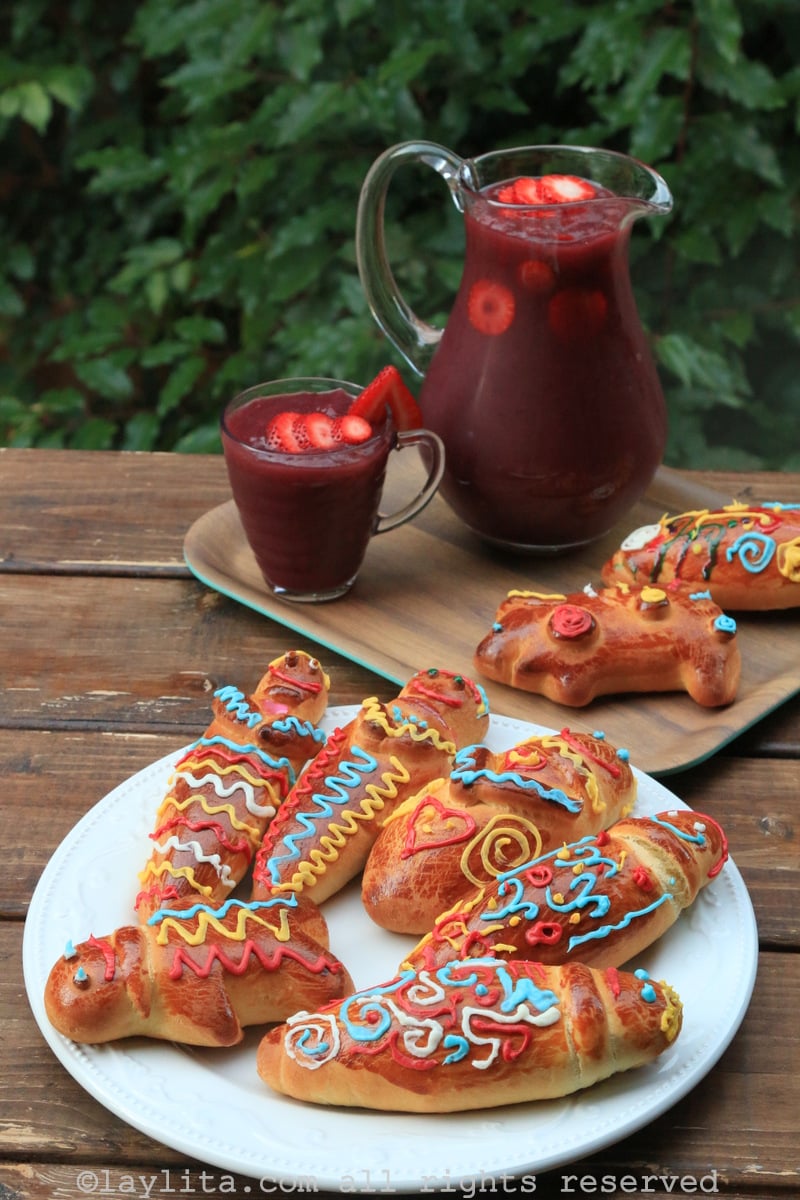 You can make the dough for the guaguas de pan by hand, or you can take the fast cheater route of using the food processor. Even with the food processor you will still need to do some work with the dough, but it is minimized and helps get that nice elastic texture. My first batch of guaguas turned out slightly bloated, essentially they rose a lot more than I expected and as my kids said: “those babies look fat”. I also found it challenging to keep their size consistent and ended up with some small and some much larger. For the next batch, I decided to try rolling out the dough, then I used a piece of construction paper to make a stencil of the shape I wanted the guaguas to have. These two things helped me keep my second batch more uniform and skinnier – they still fattened up in the end, but look more like normal babies instead of sumo wrestlers. The ones formed by hand do have a more rustic and authentic look, I’ll let you decide which you prefer. This recipe will yield between 10-15 guaguas de pan, depending on the size you make them. 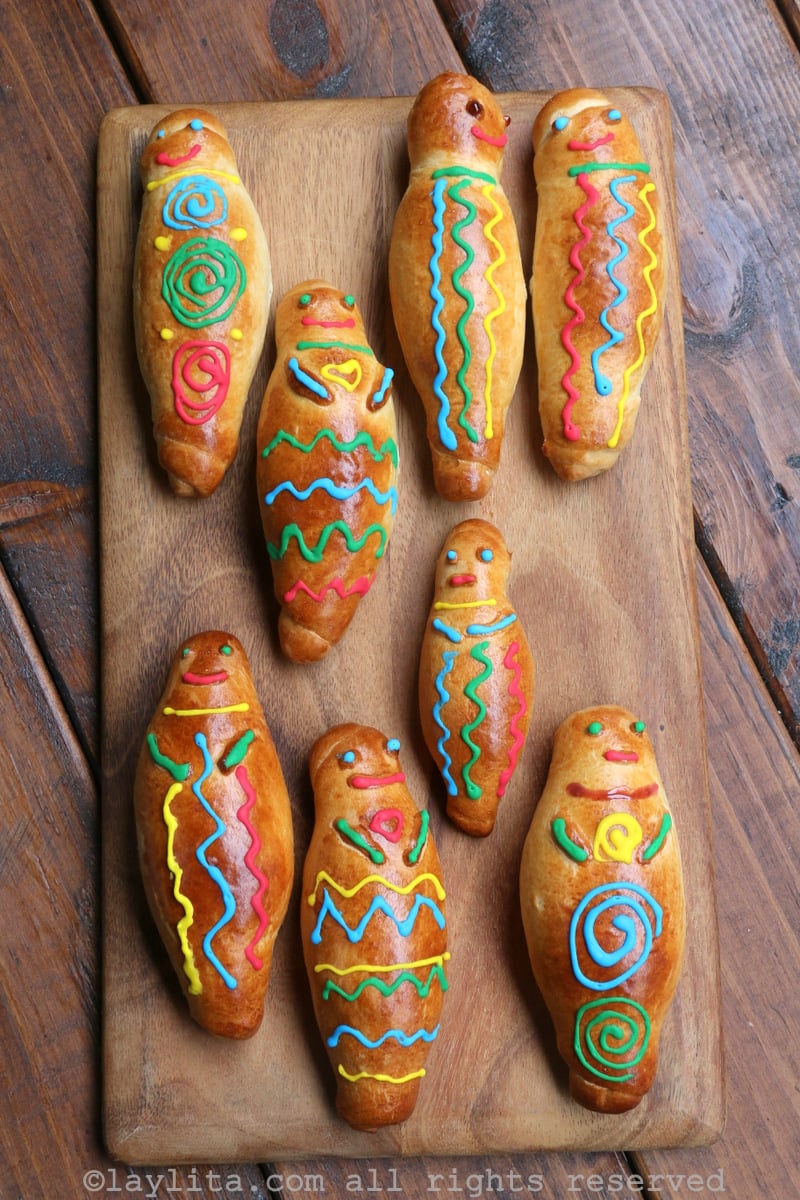 When I was growing up my mom was always baking some sort of bread, so of course around this time of the year she would give each kid some bread dough (all ready – no work for us) so that we could make our own guaguas, we would get very creative with our ideas on how to make our bread figures and how to decorate them – a few times we got too creative and gave them certain inappropriate parts. My kids love helping make the bread babies and while I like to have some guaguas that look “normal”, I still always give the kids a piece of dough to let them make their own creations – this is also part of the whole tradition in our home.
When it comes to decorating the guaguas you also have a few different options, you can use raisins, as I did for the eyes of the first batch. They work well, but do tend to pop out as the bread bakes. 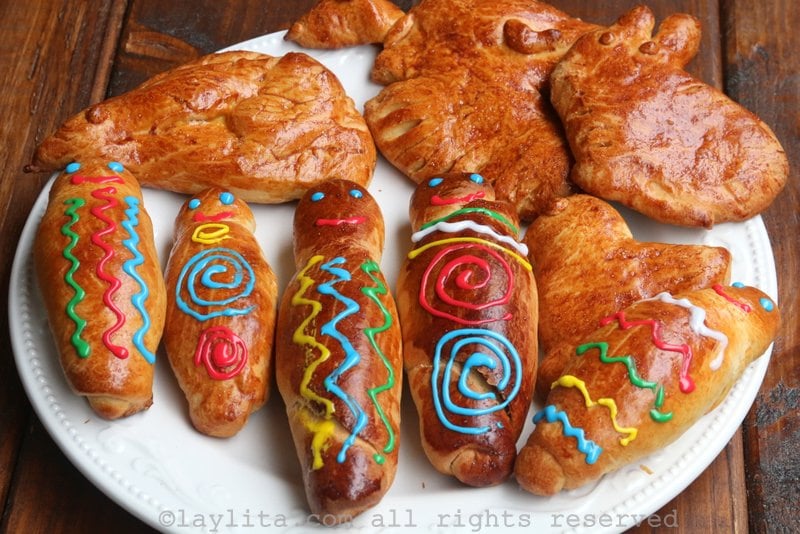 I also thought that using mini M&M’s would be a brilliant idea, but it turned out to be another not so great idea: the colors leak, the M&M’s burn and they also pop out. You can also use the dough itself to create small eyes, mouths and even hair or other decorative parts for the bread babies. I recommend that you add these after you have brushed the bread figures with the egg wash as it will also act as glue to keep the parts together. The final option, and the easiest in my opinion, is to use cookie icing to decorate the guaguas after they have baked and cooled down.
Guaguas de pan are served with a glass of colada morada, a traditional thick drink made from purple corn, fruits, spices and herbs. The colada can be warm or cold, but I recommend that you eat the bread warm. 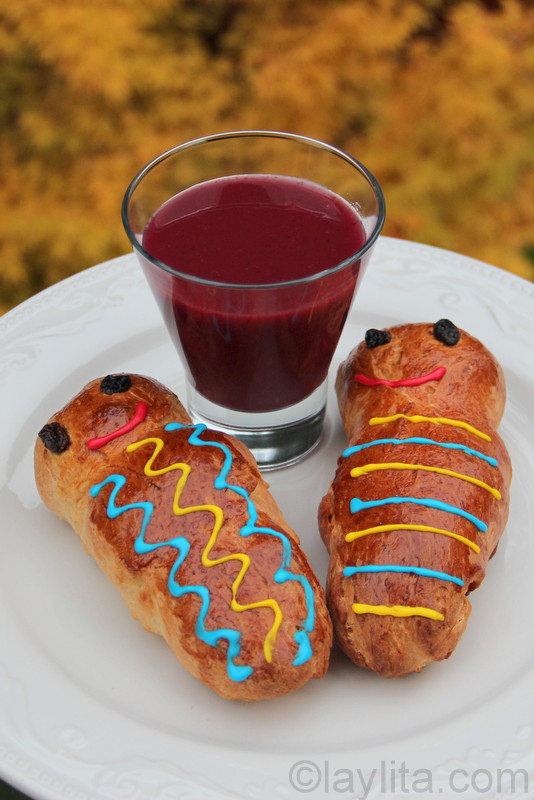 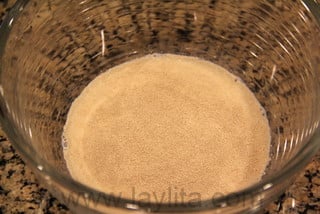 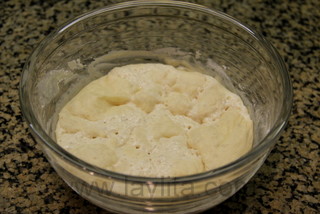 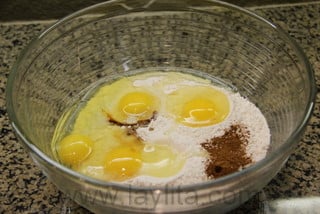 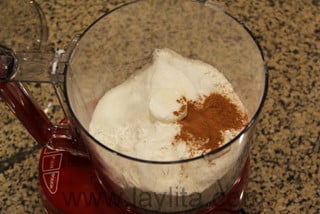 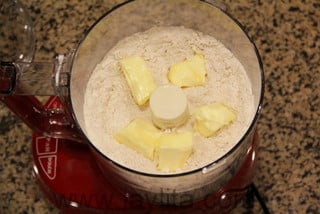 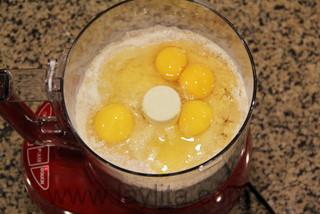 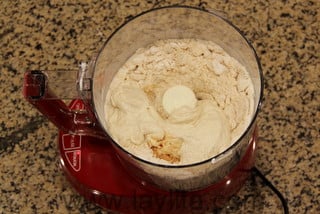 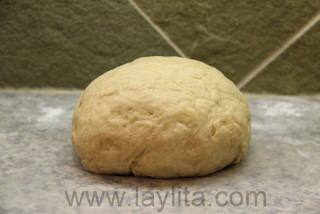 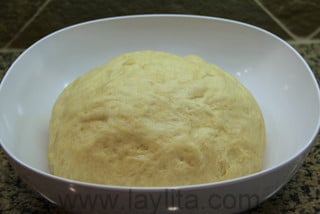 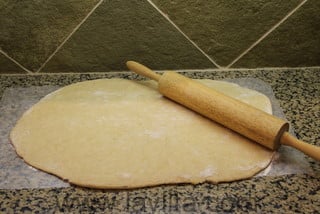 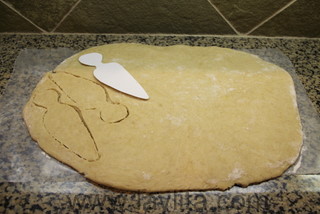 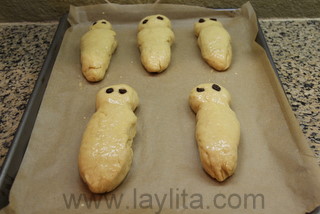 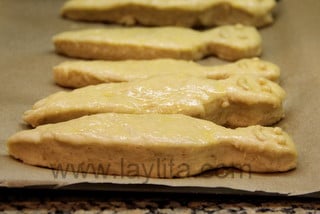 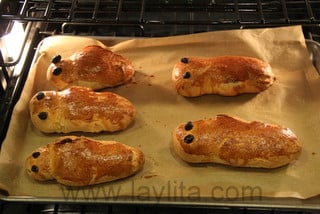 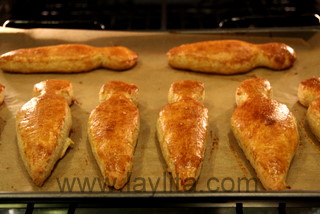 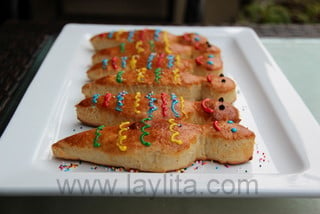 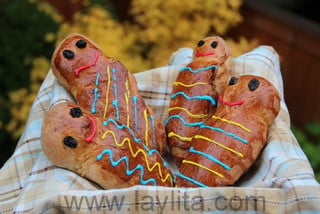 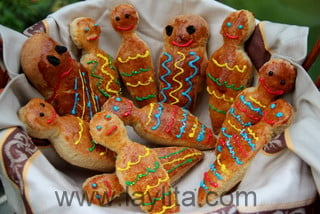 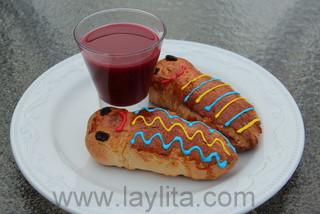 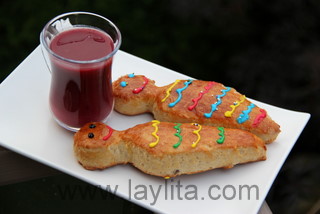 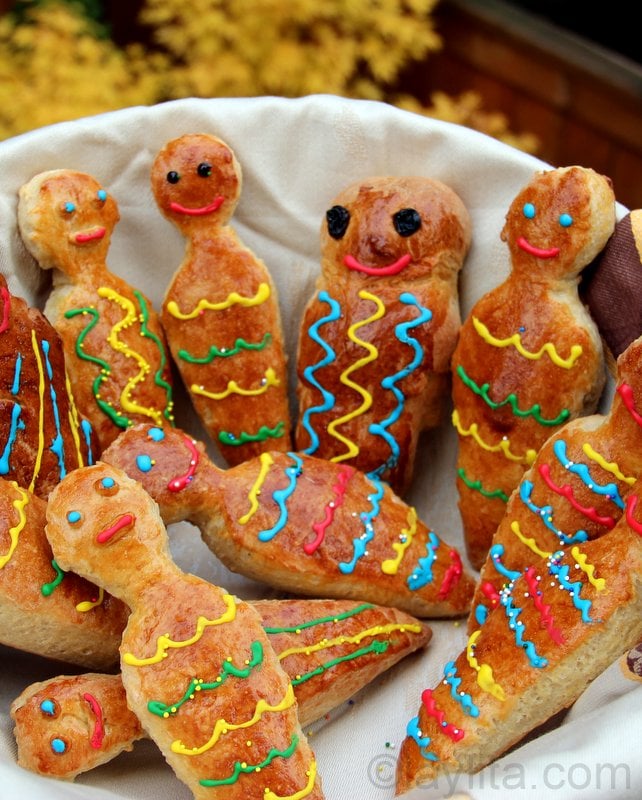 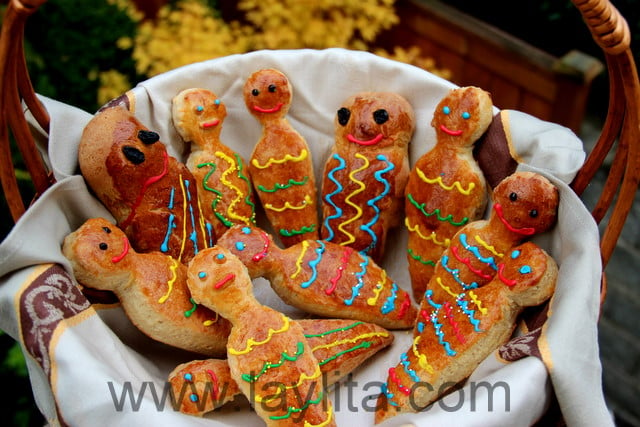