Home » About Laylita » My story

Everything you ever wanted to know about Layla Pujol, aka Laylita:

I grew up on a farm in a small town called Vilcabamba, near the city of Loja in Ecuador. I moved to the US after high school and went to school in Austin, Texas. I currently live in the Seattle area. My husband, Nicolas is from France, he also ended up in Austin for school, which is where we met. We have two boys, Alex & Marc, who love to eat and “rate” everything we eat. Outside of cooking and taking photos of food, my background is in online marketing, with a strong focus on travel and Latam markets.

You could say that my family is an example of modern day nomads; my parents started it when they moved from the US to South America in the 70’s, they were originally in Colombia and then decided to move permanently to Ecuador. For both my husband and myself, there are many times when we wish we could live closer to our families and to the places that we grew up – you always miss your roots. However, we are fortunate enough to have established strong friendships with so many amazing people in the US, including other modern day nomads. We have met great people from Ecuador & France here, and many others who come from Mexico, Italy, Russia, Egypt, Estonia, China, India, Iran, Argentina, Brazil, among other places. I love being exposed to so many different cultures and of course, such a great variety of international foods.

How this site got started
In Texas I lived with my grandmother for a while, she is from Louisiana and is also an amazing cook. I have fond memories of all the holidays celebrated at her place, some great food memories include my grandfather’s BBQ ribs and brisket, my grandmother’s gumbo & jambalaya, her chicken spaghetti, among any others. While my grandmother’s food was delicious, I always found myself missing the Ecuadorian food that I grew up with, so I had to learn how to cook these dishes myself and adapt them based on the ingredients I found in the US. I could always ask my mom or friends for recipes, but I never got exact quantities or precise instructions: it was “add a little bit of this, some of that and cook it for a while”. That’s the way you cook in Ecuador, you learn to get the flavor right based on your “sazon” or seasoning skills. I started documenting quantities and cooking times when friends asked me to share recipes, then my husband suggested that I start a blog to post the recipes to make it easier to share. Even though my blog is mainly focused on Ecuadorian and Latin food, I will also post recipes for dishes that I have learned from friends or family, and/or that are simply influenced by the ingredients and places around me.

While I started this site to share recipes with friends, it’s become more than that and my dream is to use it to introduce more people to Ecuadorian food. This site is also for all my fellow Ecuadorians or those who have lived there previously, but are now living outside of Ecuador and miss the food. I try to keep my recipes as close to the traditional versions, but with adjustments for ingredients that are hard to find outside of Ecuador. Ecuadorian food has so much diversity, which is in line with geographical diversity of this small country; there is a wonderful variety of fruits and vegetables that grow in Ecuador. Combine this with the people, who use these ingredients in such a loving and respectful way: I think that using every part of an ingredient when you cook shows respect to it – this is shown in a simply pineapple drink called chicha de pina which uses parts of the pineapple that most would throw in the trash or dishes like caldo de pata or cow feet soup, which is made with a part of the cow that in other places would be discarded. If you’ve ever visited Ecuador, you have likely met local people who even though they barely know you will welcome you into their home and are more than willing to share their meal with you.

I’ve always loved food, though I will admit that I was a little picky as a child. One the first things I learned to cook all by myself were plantains. My food is influenced by my mom’s cooking; she grew up in New Mexico, and brought her love of spicy food to Ecuador. I remember she made everything from scratch: tortillas, sauces, bread, etc. Our house was always filled the smell of something baking or cooking. My mom’s cooking could be described as combination of New Mexican influence (think spice), Ecuadorian recipes and ingredients, but always with a healthy twist (olive oil instead of lard, homemade yogurt instead of sour cream, whole wheat flour, brown rice). We grew many of the vegetables and fruits we ate on our small farm. My mom had a small business that made several food products (herb salts, banana vinegar, cakes, whole wheat bread, cookies, etc) and would hire the local ladies to help produce these. These ladies were the ones who would tell us stories and folk tales (many scary ones about the devil), but they would also cook very traditional Ecuadorian dishes (empanadas de viento, emborrajados, locros, fritada, quimbolitos, and more) which I loved. My food is also inspired by my friends and their mothers who cooked amazing dishes, both when I was in elementary school in Vilcabamba as well as when I was in high school in Loja. In Ecuador, you cannot help but be exposed to great street food or snack food, from salchipapas to chifles to carne en palito to green mangos with salt to espumillas.
Some other random information: I love all types of kitchen gadgets and anything kitchen related (except for doing dishes), though I am currently banned from adding anything new to my kitchen gadget collection due to lack of space. I can’t cook without cumin, cilantro, garlic, limes, avocados and cheese – if I’m out of these ingredients it means I need to go grocery shopping. I love grocery shopping (especially at Farmer’s markets, Pike Place Market, Metropolitan Market, Uwajimaya, Whole Foods, and Costco). I prefer salty and spicy foods to sweets. I say “what the crap” a lot. I was deathly afraid of bulls as a kid, so I always avoided wearing anything red when going on hikes where we might run into any bulls. I suck at sports, but I used to be really good at climbing trees – especially if they have fruit to pick.

PS – This is futbol (soccer) situation in our home: we all support Ecuador (and the US and sometimes France, unless they are playing against Ecuador), I am a supporter of Liga de Loja (my awesome hometown team) and Emelec. Sadly, in 2012 my kids were brainwashed by my Barcelechista brother who convinced them to support the Ecuadorian Barcelona team. My other brother is a Liga de Quito supporter and my mom says she supports all of the teams her kids go for. 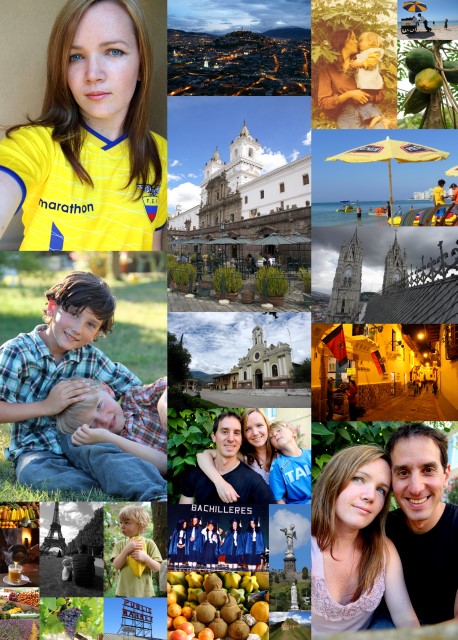