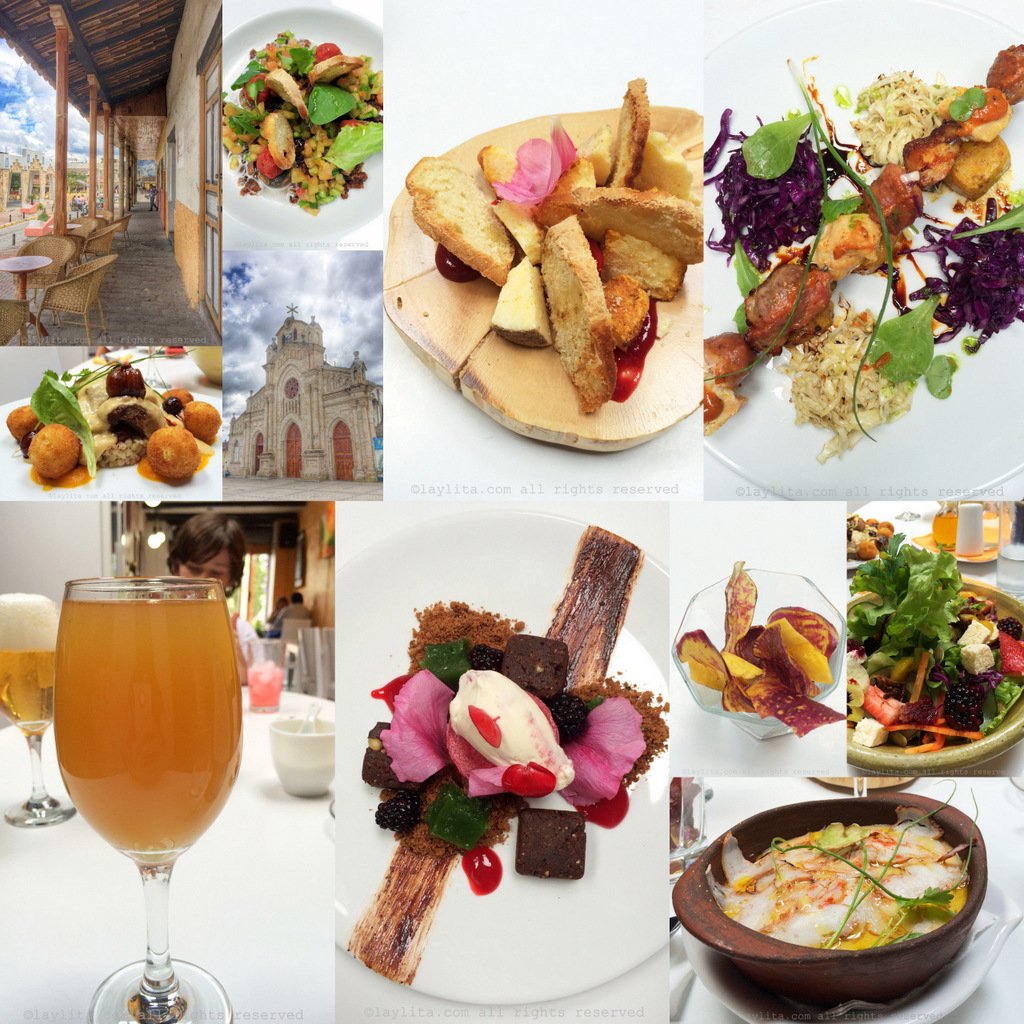 My preferred source for trying new restaurants when I travel is usually recommendations from friends and people I meet through the blog. In my personal view, restaurant and travel sites like Yelp or TripAdvisor don’t typically have the best coverage of local restaurants in Ecuador – though to be fair, it is getting better and bigger cities like Quito/Guayaquil/ Cuenca have more online restaurant reviews. Even then sometimes the reviews are very gringo skewed (since foreigners tend to use these sites more often and sometimes rate restaurants based on what they expect in their home country). However, I still check them out just in case, and I was mainly curious to see what restaurants from my home town of Loja would be included on TripAdvisor. I was surprised to see that one of the top places was a restaurant in Saraguro – which is actually a few hours outside of the city of Loja – right in between Loja and Cuenca. The restaurant Shamuico Espai Gastronòmic got my attention and I started researching (ie Googleing) it to get as much information as I could. I loved their concept and since I knew that we would be driving from Cuenca to Loja, I added it to the list of places to try, and asked my brother, who was picking us up in Cuenca, that we stop there for lunch. 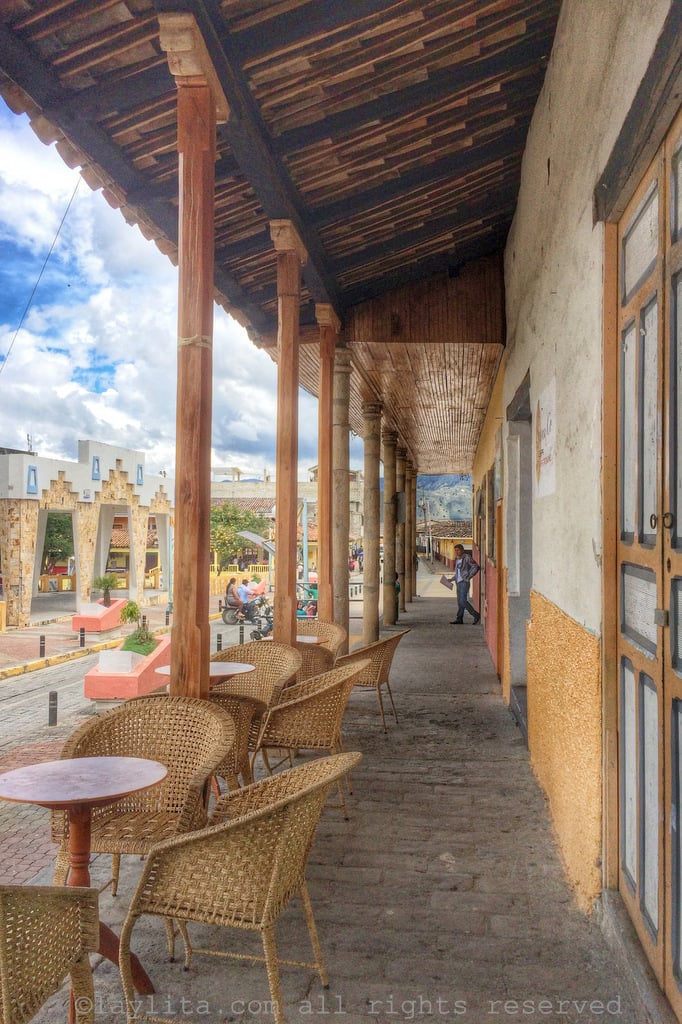 For more context on the location, Saraguro is a small town in the province of Loja and is the home of the Saraguros – an indigenous group that traces their roots back to the days of the Tahuantinsuyo or Inca empire. In the past, Saraguro wasn’t much of a tourist destination, but that seems to be changing as people realize that it has a lot to offer, from waterfalls and outdoor adventure to local artisans. I didn’t have the chance to visit and stay there during this trip, but it’s on the list for next time. 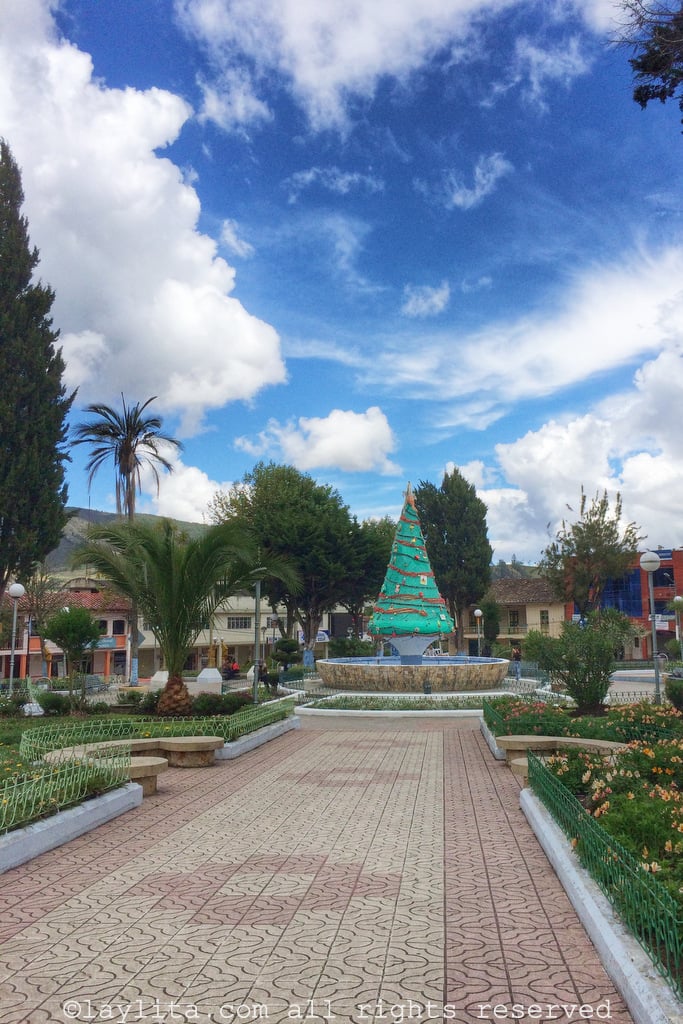 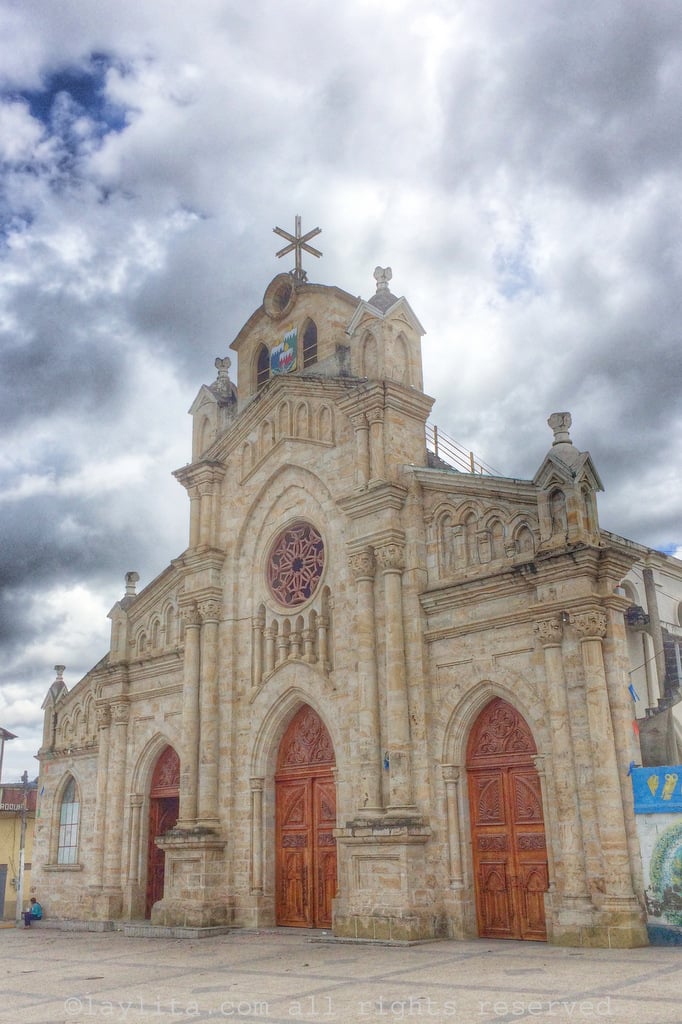 The chef of Shamuico Espai Gastronòmic is Samuel Ortega, a native from Saraguro who spent several years in Spain, where he studied gastronomy and worked at many highly rated restaurants, including an internship at El Bulli. The concept of his tapas style restaurant in Saraguro is to apply all the modern techniques he learned in Europe to traditional Ecuadorian dishes, as well as his own unique creations and twists. The restaurant is located on the main plaza, right next to the church. You have the option of sitting outside – perfect for people watching, or inside – perfect for watching the chefs in the kitchen as they prepare the food. I especially love the lighting inside – one of the biggest challenges of getting good food photos at restaurants is the lack of good light and this is especially frustrating because when I really like a restaurant, I want to make sure that the photos reflect how great the food is. The décor is a perfect mix of modern with a rustic local touch and you will see paintings (probably by local artists) featured on the walls.
My dad wrote a song called Acacana (the name of a mountain close to Saraguro) and the song talks about Saraguro as being a traditional stop back before cars & highways for those making the journey from Loja to Cuenca. One part of the song says “cuando llego a Saraguro, sea tarde o temprano, tomamos chicha por seguro, brindando a mi pueblo serrano”, which translates to: when I arrive in Saraguro, whether late or early, we drink chicha for sure, and toast to my Andean town. So, obviously when in Saraguro, having a glass of chicha is a must. Chicha is a fermented corn drink, it is slightly sweet since panela or piloncillo brown sugar is used in the preparation, and slightly effervescent. You could compare it to a cider. There are chicha variations made with other ingredients like cassava, rice, fruits, however, for me at least, when I hear chicha I assume it’s made with corn unless otherwise specified. And in Saraguro, it is a given that chicha is made with corn and has been fermented to the point of containing alcohol. In Ecuador, not all chichas are fermented enough to contain alcohol, most are just lightly fermented. However, if you are visiting an indigenous community and they make their own chicha, then yes it probably contains alcohol. The Shamuico restaurant had a few different options of their own house made chichas to offer, from the traditional “chicha podrida” to a lighter version, a darker version, and another “chicha huevona” blended with egg. I tried the chicha podrida, it was ~12% alcohol, so again similar to a cider or wine in terms of alcohol percentage. I’m usually not a fan of chicha and prefer to use it for cooking than drinking, but this one was really good. Next visit I will definitely do a tasting of all their variations. 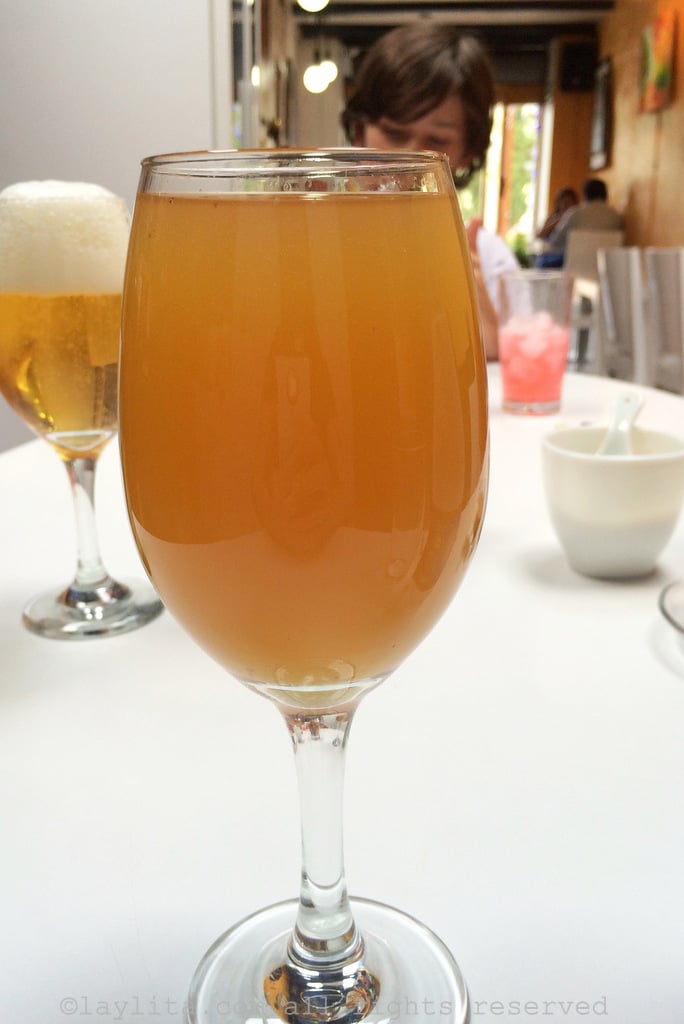 We tried the cheese plate as an appetizer, it included a few different cheeses that they make in house, some bread, and their own fruit preserves. The cheeses were aged, which if you’ve tried cheese in Ecuador is a rarity. They were very tasty and received the French husband’s seal of approval. We also snacked on chifles or chips made with sweet potato and green plantain. 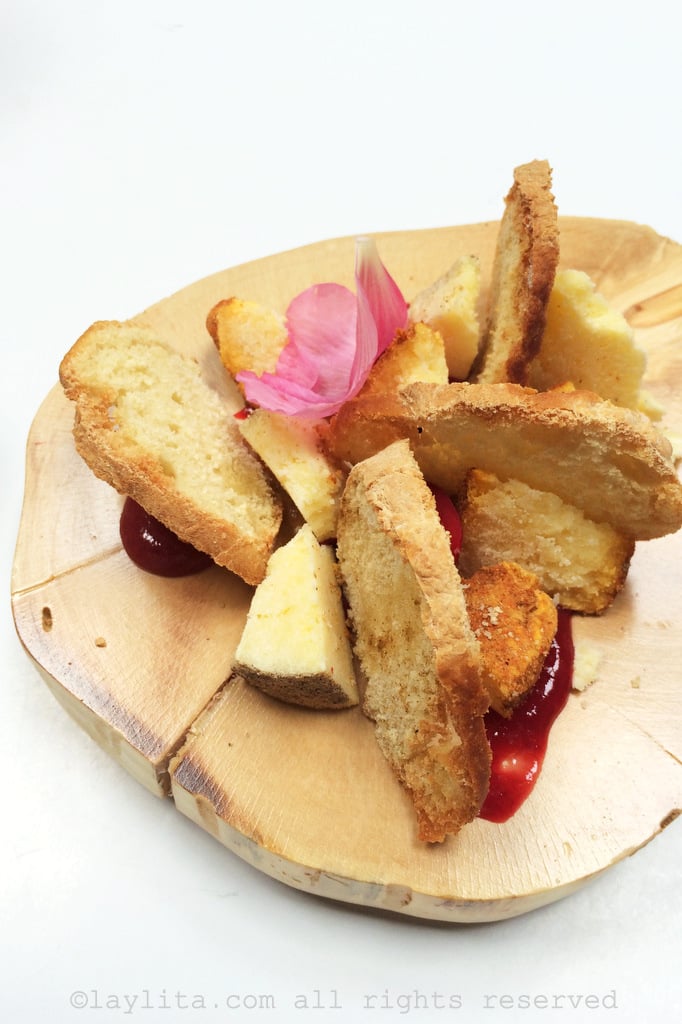 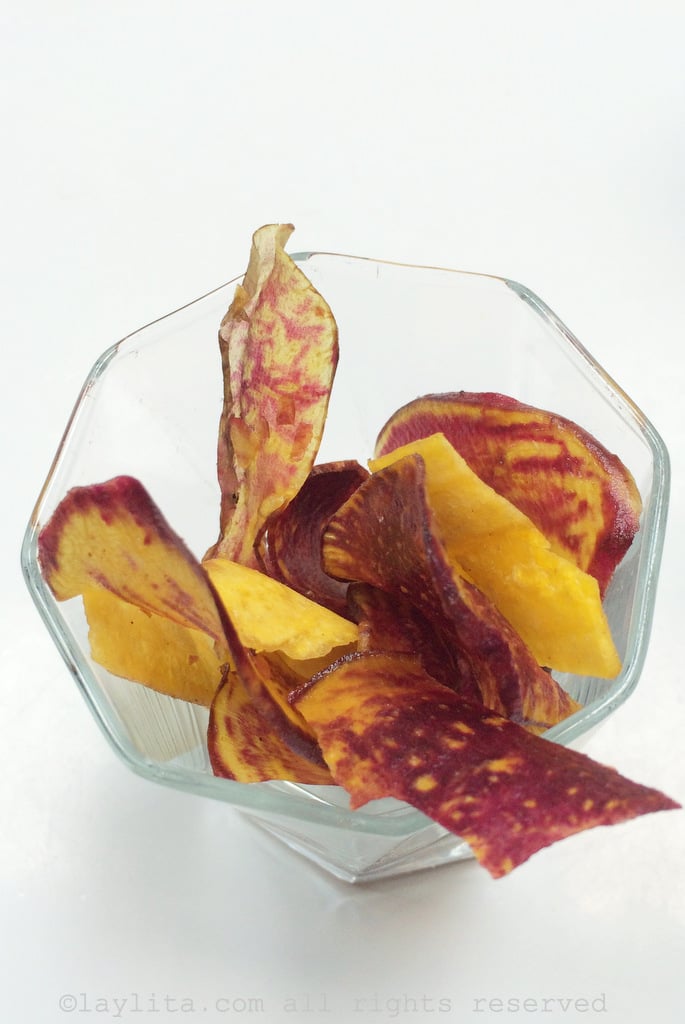 My favorite dish was the locro de papa con pulpo, locro de papa is a traditional Ecuadorian potato soup, but this variation was thicker and also had pieces of cheese and a soft boiled egg underneath the creamy potatoes. It was topped with thin slices of octopus and drizzled with spicy oil. 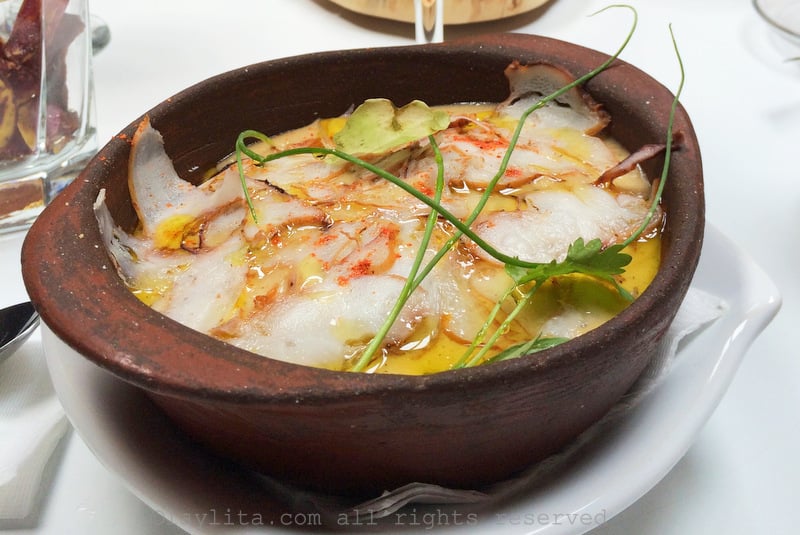 I also had the house salad, which seems to change based on the ingredients they have available. Mine had blackberries (moras), strawberries, pieces of queso fresco, caramelized onions, cucumber, bell pepper, and pepas de sambo or pumpkin seeds. My husband had a deconstructed gazpacho, which included bits of serrano ham, diced tomatoes and peppers, a tomato sorbet, and was served with the tomato broth on the side to be poured over the dish. 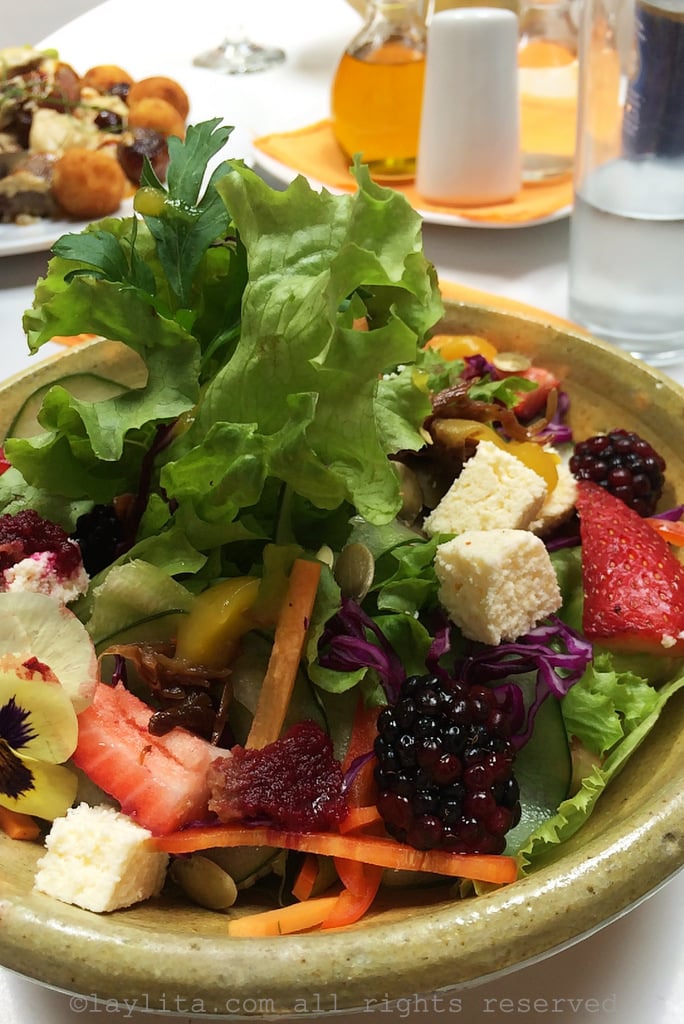 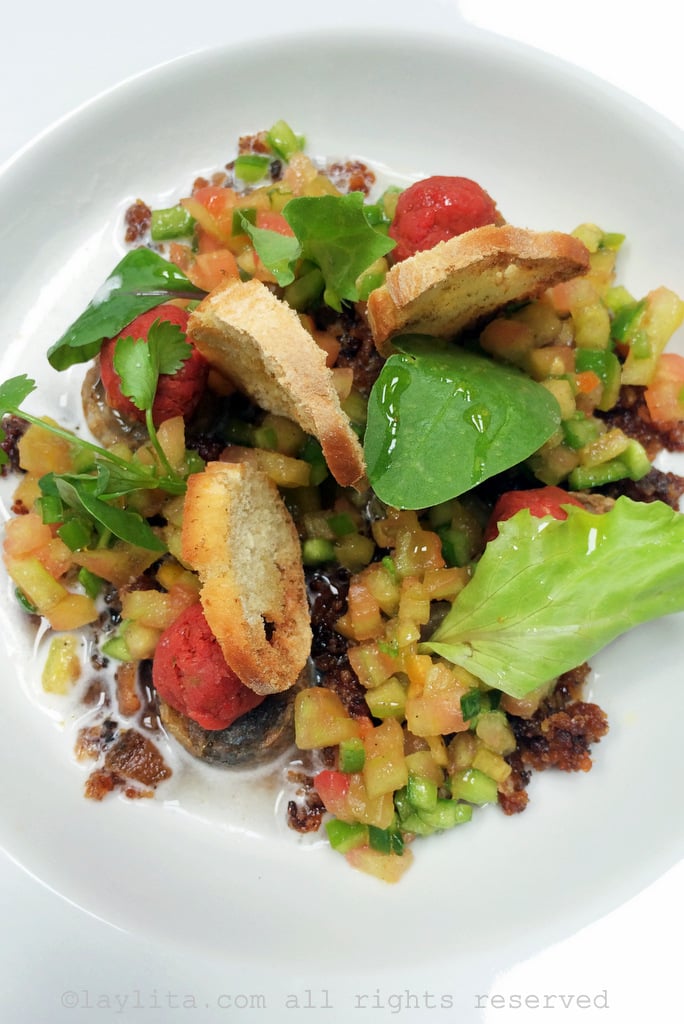 My brother had beef ternera lomo served over some sort of barley risotto with potato croquettes. The kids shared a pincho or skewer with mixed meats and a pizza. We finished (barely) with a dessert plate that included a berry mousse, small chocolate brownies and mojito jelly. Did I mention that I really enjoyed this restaurant? 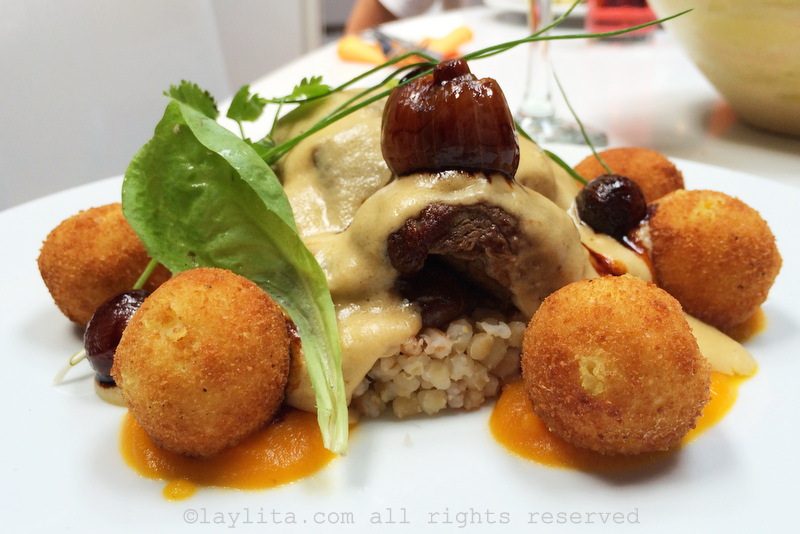 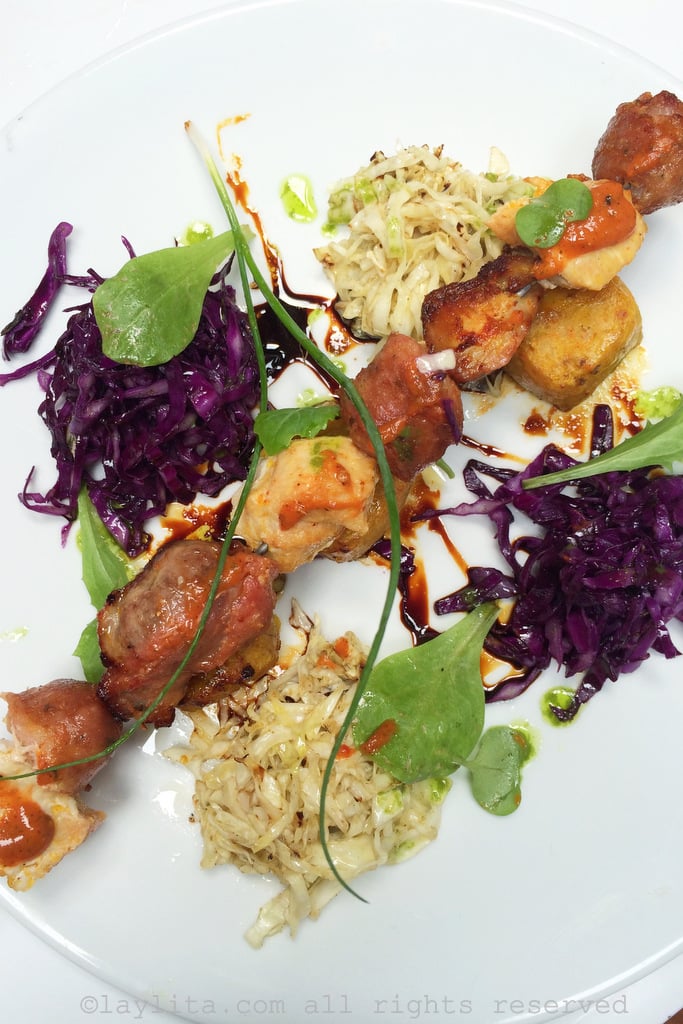 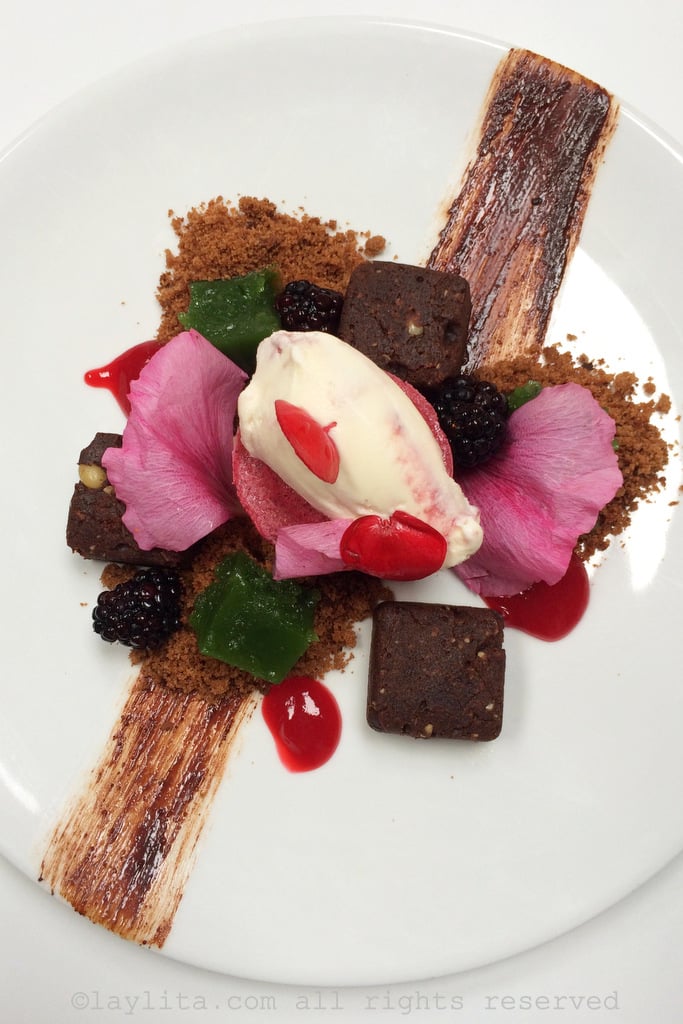 I realize that the description of the restaurant’s concept and the food might make it seem like this is a snobbish expensive place, however it’s completely the opposite. The prices are very very very affordable, and I suspect it might because the chef not only wants the tourists to try his food, but also make it appealing to the locals. The restaurant owners are also partnering with a local hacienda, called La Papaya, that grows high quality coffee and hosts events for tourists. The details (on their website) are very clear on the specific events, but I will try to visit during my next trip. And will definitely go back to Shamuico Espai Gastronòmic .

Layla Pujol is an Ecuadorian modern-day nomad who loves to cook and travel. She lives in Europe and is working on her first cookbook, which will focus on delicious Ecuadorian and Latin recipes (adapted to her style). More