This my easy recipe for making empanada dough for baking, it step-by-step photos and video. You can make the dough by hand or using a food processor (or a stand mixer).

Making homemade empanada dough is not as hard as you might think, especially if you have a food processor. And even if you don’t have one, it is still pretty easy to make by hand because the dough doesn’t need be overworked, and requires minimal kneading.

Empanadas, also known as turnovers or hand pies, are one of my favorite foods. They’re so versatile and can be made with an infinite number of delicious fillings – you can be as creative as you want with empanada fillings. Empanadas are also the perfect way to use leftovers, especially when a) you don’t enough for a full meal of leftovers and b) you want something different.

If you want more empanada recipes, you can also check out my All about Empanadas: The Empanada 101 Guide

These days it is very easy to find the empanada discs already made (frozen) in Latin grocery stores, and even though I was skeptical at first, they are actually quite good. However, homemade always taste better and fresher.

Another benefit of making homemade empanada dough for baking is that you can customize the dough by adding spices or herbs that will add flavor and complement or contrast with the fillings. You can also make a large batch of homemade empanada dough, roll it out and cut it into discs, then freeze the discs (separate with wax paper) for later use. 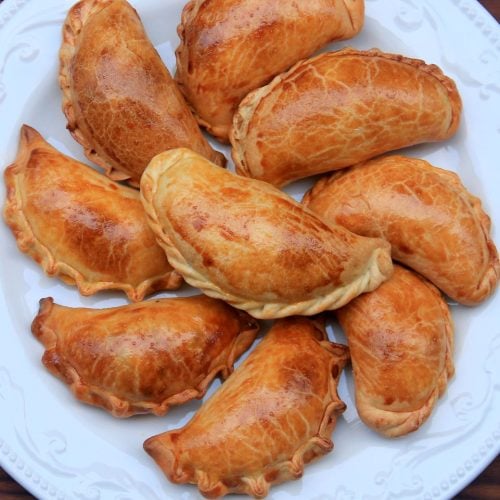 Step by step photos of how to make homemade empanada dough:

Choriqueso empanadas
Mouthwatering empanadas filled with chorizo and cheese, can be fried or baked. Served with a creamy avocado sauce.
Check out this recipe

Gingerbread pear empanadas
Gingerbread empanada dough filled with caramelized ginger pears that were cooked in a syrup of panela or piloncillo and spices.
Check out this recipe