My recipe for homemade coconut flan, a Latin style coconut custard dessert. This coconut flan is made with grated coconut, coconut milk, eggs, milk, and sugar, and has an orange caramel.

This is my recipe for homemade coconut flan, a Latin style coconut custard dessert. Flan is one of those easy desserts that everyone (or almost everyone) loves. This flan de coco or coconut flan has an orange caramel, as well as grated orange zest in it, which gives it a great citrusy taste that goes great with the coconut.

My husband loves flans, and when I met him he made one of the most basic flans ever by blending eggs, sugar and milk. I was shocked to see that he baked it in a baking pan without using a water bath. I was so sure there was no way that it was going to work, but it did. Even though I found his super quick guy-flan very egg-ey it was still edible. I was somewhat impressed that he knew how make it – even though I didn’t consider it a real flan since it lacked caramel, and yes he ended up eating most of it.

Personally, I have to have caramel with my flan – it’s the best part! I love a classic traditional flan, but also really enjoy making different variations, from this coconut flan to pineapple flan, passion fruit flan, candied pumpkin flan, and more. It’s very easy to use your favorite fruit or a seasonal fruit to give your flan a delicious touch.

Of course, in Ecuador, or any country with access to fresh local coconuts, I would recommend using those. You can make this coconut flan using small individual ramekins or you can also make it in a large pan for all to share. I served it with some fresh berries and some toasted coconut flakes. 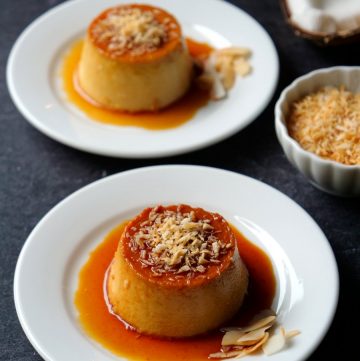